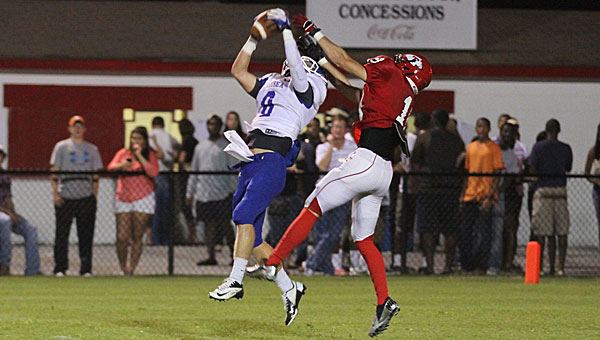 The Chelsea Hornets racked up more than 400 total yards of offense en route to downing Thompson 42-23 in the Hornets’ first game in Class 6A Region 4 on Sept. 6 at Larry Simmons Stadium.

Chelsea recorded 402 offensive yards in the game, 331 of which were rushing. The Hornets’ junior quarterback, Trent Hagin, connected on six of 17 passing attempts for 71 yards.

“This is a great win for our team, our community and our fans. I don’t think a Chelsea team has ever won at Thompson before,” said Chelsea head coach Wade Waldrop. “Trent did what we needed him to do.”

The game served as both teams’ region opener, and marked the first region game for Chelsea since moving from Class 5A to Class 6A last spring.

“At the end of the day, we didn’t get it done. Every game is a challenge. I told our team that as we get better our opponents will get better as well,” said Thompson head coach Michael Montgomery. “We played inconsistently, and inconsistency does not breed success.

“We just have to keep growing and keep getting better,” Montgomery added.

The Hornets lit up the scoreboard first after a fumble recovery by Kameron Ward set up an eventual 9-yard touchdown run by running back Julius McCall. Josh Carpenter added the PAT to give Chelsea a 7-0 lead late in the first quarter.

Thompson answered four plays later when Matherson connected with Eric Reeves on a 69-yard touchdown pass. David Buckalew added the extra point to tie the game at 7-all.

Chelsea scored again a few seconds into the second quarter on a 3-yard run by McCall. Carpenter’s PAT gave the Hornets a 14-7 lead.

The Warriors answered a few minutes later when Matherson connected with Dee Tolbert on a 41-yard touchdown pass. Buckalew’s PAT attempt went wide left, closing Chelsea’s lead to 14-13. Thompson then took the lead with less than 16 seconds left in the first half when Buckalew connected on a 36-yard field goal, giving the Warriors a 16-14 halftime advantage.

Chelsea added a pair of touchdowns to start out the third quarter: One on an 80-yard McCall run and another on a 29-yard touchdown pass from Hagin to Austin Washington. Carpenter’s pair of PATs gave Chelsea a 28-16 lead.

Thompson scored its final points of the night on a 41-yard pass from Matherson to Tolbert. Buckalew’s extra point closed Chelsea’s lead to 28-23 late in the third quarter.

Chelsea put the game out of reach with a pair of fourth-quarter touchdowns: One on a 15-yard McCall run and another on a 1-yard Hagin run. Carpenter’s pair of PATs sealed the Hornets’ victory.