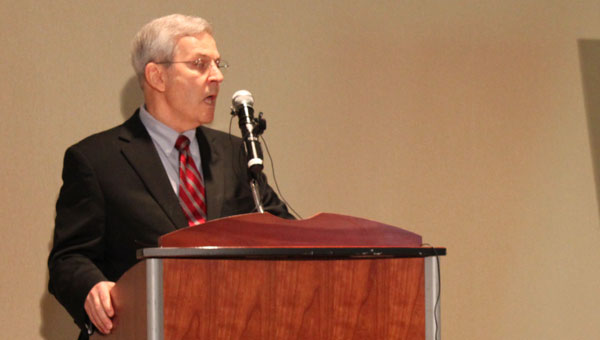 BIRMINGHAM – In response to allegations against the Harpersville Municipal Court, Judicial Correction Services held a press conference to announce the private probation company has hired a former Alabama Supreme Court justice as a legal adviser.

JCS is under contract with the Harpersville Municipal Court to supply probation services to the town.

During the press conference held at Vulcan Park in Birmingham, JCS’ Chief Executive Officer Robert McMichael said there has been “misleading and inaccurate information” regarding JCS’ involvement with the abuses listed by Harrington.

“If actual facts were examined, we would be exonerated,” McMichael said.

To look into the matter, Harwood asked for “unfettered access to all documents and records” of JCS, according to McMichael.

“Judge Harwood said he would let the chips fall where they may,” McMichael said.

Harwood said JCS contacted him about six weeks ago to do the critical analysis.

“I had no knowledge of JCS and had no relationship with them in the past,” Harwood said. “They knew they’d get my honest, impartial opinion.”

Harwood said he reviewed Harrington’s order, but would not “question or contradict” the order. He said he wanted to see how the order related to JCS.

Harwood also reviewed the depositions of Harpersville Municipal Judge Larry Ward, Court Clerk Penny Hall and JCS executive Kevin Egan, as well as the four plaintiffs in the lawsuit against the municipal court.

Harwood addressed one of the abuses listed by Harrington’s order. The order states that defendants were placed on “extended” probation for many years beyond the two-year maximum.

“Once a defendant is incarcerated, JCS is out of the picture,” Harwood said. “The court decides if a defendant should be placed on work release. JCS has no control over the situation.”

Harwood said “JCS did not have legal liability or responsibility” for the 12 abuses listed in the report. Because his assignment revolved around JCS’ role, Harwood said he would “not cast blame on the municipal court of Harpersville.”

When asked about Harrington’s use of the phrase “debtor’s prison” in his report, Harwood said he would stay away from a “characterization of the Harpersville Municipal Court.”

“My main focus was to ask what was JCS’ duty and responsibility in this particular item of criticism,” Harwood said of the grievances Harrington listed against JCS.

FROM STAFF REPORTS ALABASTER – The Pelham Panther volleyball team picked up their first win of the season with a... read more