B. B. Comer triumphs over Bulldogs 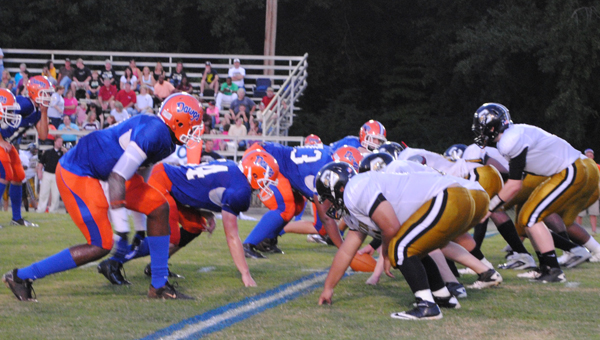 MONTEVALLO – Recent struggles for B.B. Comer made their 33-24 victory over Montevallo Friday night one worth celebrating.

“It’s been so long since we’ve had sustained success so starting out 1-0 in the region is big for us,” Comer head coach Anthony Jacks said.

After a 6-6 stalemate at halftime, both offenses came out to play in the final two quarters.  It was the Tigers that pulled off a 27-6 run to finish the game after the Bulldogs scored two touchdowns in the second half’s first three minutes.

“We saw some things to attack [going into the third quarter] and we did,” first-year Montevallo coach Andrew Zow said.  “I think we got back to trying to relax a little bit.  I came out aggressive and I should have stayed aggressive.”

Comer scored the game’s first touchdown in the first quarter, capitalizing off of a Bulldog turnover.  Montevallo answered in the second quarter, tying the game with a Trevor Chatham pass to Demetrouse Conwell.

An electric Montevallo attack opened up the second half.  A 44-yard pass from Chatham to fellow senior Korey Cunningham set up a five-yard Cortez Williams touchdown run.

Williams scored again moments later from 17 yards out to make the score 18-6, after Chase Inabinett recovered a botched Comer kickoff return for the Bulldogs.

The Tigers settled down and ran the ball 63 yards down the field in eight plays for their first touchdown of the half.  A two-point conversion brought Comer within four points of the Bulldogs.

The next Montevallo drive ended when Kris Neal intercepted a Chatham pass off a tip, returning the pick to the Bulldog six-yard-line.

Three plays later, the score became 21-18 as the Tigers took the lead for good on a Daniel Caldwell touchdown run.

The Tigers’ lead grew thanks to a 21-yard Zach Osbourn run for a touchdown in the fourth quarter.

Montevallo brought the score to within three with Williams’ third touchdown of the half.  The 15-yard scamper was the longest scoring run of his night.

Comer secured the win with an eight-play drive.  Versatile senior fullback Caleb Duffee put the ball in from two yards out shortly after a 21-yard rush by quarterback Tyler Holmes.

“Caleb did a great job tonight playing inside linebacker and fullback,” Jacks said. “He’s one of the three seniors who are the heart and soul of this team, and he hardly ever came off the field.”

The season’s first regional win for the Tigers moves them to a 1-1 record, while the disappointed Bulldogs fall to 0-2 on the season.

“When you’re in 3-A ball, a lot of your players are playing both ways, and you’ve got to adjust,” Zow said.  “There’s just no excuse for cramping up at the end like a lot of our guys did.”