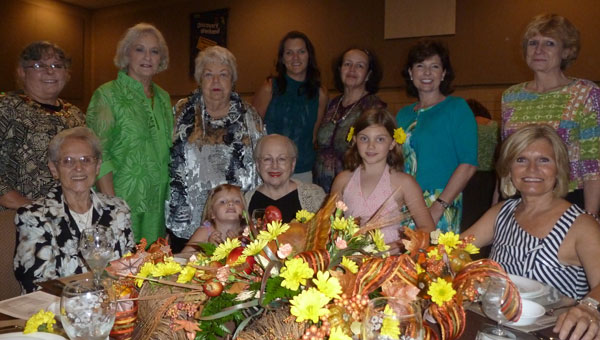 In 1869, six women met in Boston and organized the Methodist Women’s Foreign Missionary Society, the forerunner of the United Methodist Women (UMW). The group’s first goal was to raise funds to send a female educator and doctor to India to educate and treat women who were denied schooling and medical care from males.

“The UMW is the largest denominational faith organization for women whose mission is fostering spiritual growth, developing leaders and advocates for justice,” said Jackie Brown, Columbiana United Methodist Church’s UMW president. “There are 70 women in the Columbiana UMW. “

“ The award goes to the woman who exemplifies the ideals and purpose of the United Methodist Women,” said Jackie Cates as she presented the award. “(Lansford) exemplifies the concepts of mission through participation in the ministries of the church.”

“God has a plan for our lives,” said Brown. “We do not have to be foreign missionaries. We can respond to God’s call to be his ambassadors right here at home.”

The circles meet on the third Wednesday of the month, September through May. The Circle of Hope/Love (day), led by Caroline Johnson, will meet Sept. 17, at 1:30 p.m. in the church’s small dining room. The Circle of Friendship (night) will meet that same night at the circle leader’s home, Lisa Davis, 107 Arlington Lane. Both are open to all for fellowship and outreach.