It’s not all talk of sports or politics 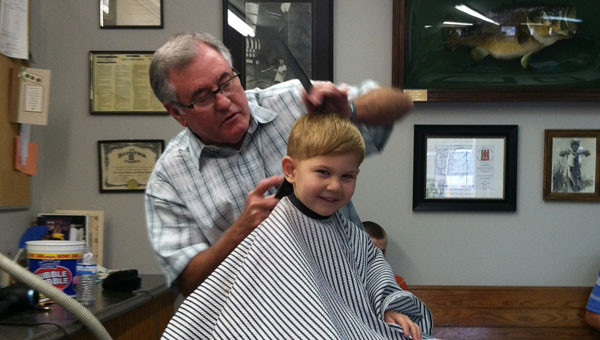 Gary the barber and his customer, Alex. (contributed)

The red and white striped pole hanging by the front door lets you know what to expect. This is a traditional barbershop. Inside, you find a barber cutting hair, local men waiting their turn in the barber’s chair, and serious discussions of hunting, fishing, golf, politics, etc.

In Gary’s Barbershop on U.S. 119 in Indian Springs, you also find ladies and children. Today, Mrs. Lillian Marsh is here with her children. Her son Alex is 3-and-a-half. He sits on a padded board across the arm-rests of the barber’s chair.

Alex sits as still as a young boy his age can possibly sit. Any movement, however, presents challenges for a barber.

Gary times his cutting so Alex’s occasional movement does not interfere. Performing a good haircut on a moving target is tricky.

“When you shoot skeet, you always have another shot,” says Gary. “This is a one shot deal. You’ve got to get it right.”

Mrs. Marsh praises Alex for how still he sits. Then she says, “That is pretty amazing. He would rather be running up and down the field outside.”

September marks the 16th anniversary of the opening of Gary’s Barbershop, a Christian-owned business. In 1996, Gary Authement moved here from Houma, La., with his wife, Annette, and their three children, Chris, Brandy and Brian. Annette worked for Bell South and was transferred to Birmingham.

Gary’s daughter, Brandy, joined him in the business for 10 years. She was cutting hair there while she got married and later had a baby. The regular patrons of Gary’s Barbershop enjoyed Brandy working there. Gary fondly reminisces, “I miss her a lot. She created her own business, with a whole lot of ladies. She created a bright shining spot in this place.”

Gary started cutting hair after going to barber school in 1967. In 1968, he was drafted. Gary served his country in the Army for three years in Vietnam and then Germany. Now, on Tuesday through Friday, he serves people in Cahaba Valley who want a good haircut and stimulating conversation.