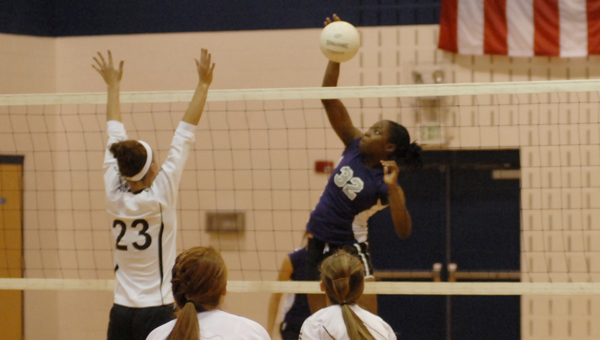 Kingwood coach John Jones was pleased with his team’s performance. He blamed himself for his team’s loss in the first set because he made a mistake with the starting lineup and rotation.

“They are used to playing one rotation all year long and the coach messes them up,” Jons said.

The Lions were led by Madelyn Pearce with nine aces kills and four aces, but Pearce had plenty of help in the likes of Casey Whitmer, who had five kills and six aces and Katie Allen Etheridge, who added eight kills and two aces.

Also having solid nights for the Lions, were Sloane Pickett with four aces and four kills and Blair Holsombeck who had two aces and a team-high sixteen assists.

In the first set, Class 1A Cornerstone upset their Class 2A rivals.  After several ties and lead changes, Cornerstone took an 11-11 game and pulled away with a 14-6 run to close out the set.

In the second set, Kingwood reversed the Cornerstone run from the previous set by jumping out to a 14-6 lead themselves.   The Lions closed on an 8-1 run to end any chances of a Cornerstone comeback to put the set out of reach.

The third set started with Kingwood again jumping out to a big lead at 14-8.  Cornerstone battled back and got as close as 19-15, but Kingwood was too much winning 25-19.

“Since our first meeting with Kingwood, we have been heavily working on defense and although we lost the set, we have made great improvements in our defense,” Cornerstone head coach Cyndi Sims said.  “I was really excited to see how well the gals played this evening against a team as strong as Kingwood is this year.  It’s always fun to meet John Jones and his team on the court.”