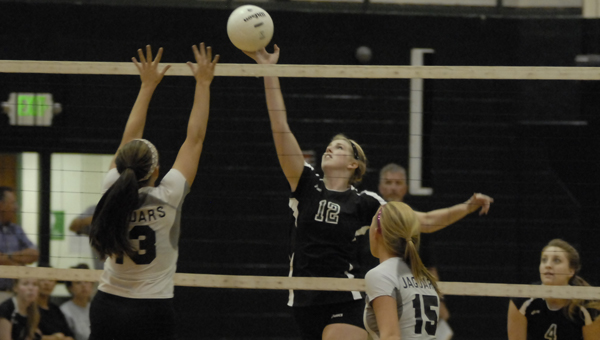 Pelham's Bradleigh Smith puts down one of her six kills in the Panthers' 3-2 Area 8 win over Spain Park on Sept. 11. (Reporter photo / Mickel Ponthieux)

“I think we are both pretty even teams and you could tell that by the way the match went.” Pelham head coach Perry Robinson said on the victory.

Tuesday’s meeting between the Panthers and Jaguars was the third in the last four days with Pelham winning all three matches, including a victory for the Mid South Tournament championship.

“We played them in that tournament on Saturday in pool play and later in the championship,” said Robinson. “And they were close too.”

Spain Park took the first set of the match by holding off a six-point Pelham (7-8, 1-2) rally and scored the winning points on two Panther errors.

The Panthers carried the momentum from the second set into the third and took a 12-6 advantage. Pelham extended their lead to seven, 15-8, then Autumn Wild Hiett led the Panthers on a 10-1 rally to take a 25-10 third set win and a 2-1 lead in the match.

“She has that low top spin that will eat you up,” Robinson said on Wild Hiett. “She has been working on it and we want her to keep doing it obviously. She gets us going and we played defense behind her.”

Spain Park regained control of the match in the fourth set. The Jaguars took an early three-point lead, but saw Pelham rally back to tie the game twice. However, Spain Park regained a 10-9 lead and battled for a 25-17 set win to force a fifth set.

“I think we played really well and made adjustments,” said Spain Park head coach Paula Dill. “We had a game plan that we executed. I think Pelham is a very good team and I enjoy playing them.”

Wild Hiett led Pelham to a 7-1 lead to start off the decisive set with two aces and a kill. The Panthers extended their lead to 14-6 on a 7-0 run. Spain Park was able to fight off match point to draw within four, 14-10. That would be as close as the Jaguars would get as Pelham picked up the 15-10 set win on a Spain Park hitting error.

Kingwood falls on the road to Edgewood