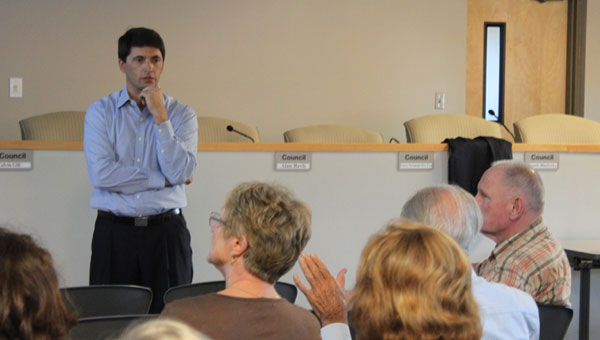 Blackwell explained pros and cons of the Sept. 18 referendum, which would allow the state to take $437 million from the Alabama Trust Fund during the next three years to support the state’s diminished general fund budget.

Created in 1982, the Alabama Trust Fund is funded by taxes collected from the state’s oil and gas production. In 2008, the fund had about $3.2 billion, but the amount diminished to $2.3 billion in 2011 due to decreased interest rates and the money withdrawn to fund the Education Trust Fund’s rainy day fund, Blackwell said.

Voting “yes” to the referendum would allow the state to take about a fifth of the Alabama Trust Fund to fund the general budget.

Blackwell said the “pros” of the referendum are as follows: The state is using its own money from a “savings account;” Medicaid and corrections, which account for about 60 percent of the general budget, would be “taken care of;” and the budget would be balanced.

As for “cons,” Blackwell said the decision is only a “short-term fix” for the next three years.

“If in three years we still have a down economy, what are we going to do?” Blackwell said.

Additionally, the referendum does not require a repayment of the funds to the Alabama Trust Fund, Blackwell said.

If Alabama residents vote no, the legislator must “find another way to come up with the money,” Blackwell said. “The government will call a special session to talk about the general fund, but this doesn’t affect the education fund.”

Blackwell also said if the referendum fails, Gov. Robert Bentley could issue a proration order, which would take 10 percent of the budgets of all state agencies.

When asked how he would vote, Blackwell said he is struggling with the question because, “if you don’t do this, what’s the answer?”