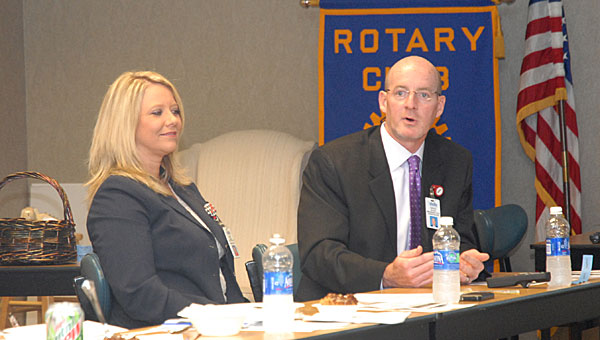 Wilson’s remarks came during a Sept. 13 meeting of the Alabaster-Pelham Rotary Club at Shelby Baptist.

During the meeting, Wilson and state Rep. April Weaver, R-Brierfield, the medical center’s director of business development, encouraged Alabama residents to vote in favor of the plan during a Sept. 18 election.

Through the election, voters will be able to decide whether or not to allow the state to take money out of the Trust Fund for the next three years to prop up the general fund budget.

“Currently, Medicaid typically reimburses us much less than our costs (to treat the patient),” Wilson said, noting if the Sept. 18 vote fails, it will financially impact all hospitals across the state because Medicaid’s reimbursement amount could decrease.

Wilson said up to 80 percent “of all community pharmacies in Alabama” could close if the vote fails.

“We know the dollar amount of what could be cut, and that money has to come from somewhere,” Wilson said. “The state can’t magically make that money appear.”

“The general fund is the problem, because there are no growth taxes going in there,” Weaver said, noting a set amount of tax money has gone into the general fund for many years.

Weaver said transferring money from the Alabama Trust Fund will “bridge the funding gap” until revenue from the two “growth taxes” starts building up in the general fund.