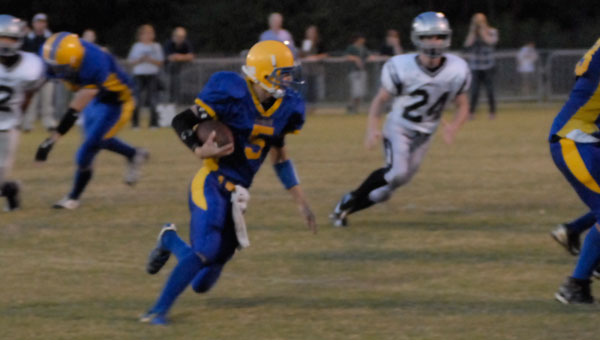 “It is a great rivalry,” said Nafe said. “I couldn’t be prouder of our guys.  My seniors really stepped up.”

Hope was led by junior quarterback Dillon Thompson who was 10-of-12 passing for 173 yards. Thompson also added two rushing touchdowns.

Evangel coach Del Clayton said his team came out flat in the first half, but was glad how his team regrouped in the second half.

“I am very proud of the effort that our guys gave in the second half; coming back from two touchdowns down to take the lead,” Clayton said.

Hope scored on the first play of the second quarter when junior running back Reid Allen scored on a four-yard touchdown run.  The two-point conversion was no good and the score stayed at 6-0.

Allen scored again late in the second quarter on another four-yard run pushing the lead to 12-0 after another missed two-conversion.

Evangel took the opening possession of the second half in for a score, capped off by a Nate Scott 6-yard touchdown run. Dru Bell added the extra point to close the gap to 12-7

Evangel took their first lead when Thompson found Lau for a 34-yard touchdown pass on a fourth and 24 play. Bell added the extra point and with 1:28 left in the third to make the score 14-12.

The Eagles reclaimed the lead with a Thompson 10-yard touchdown run with 11:47 left in the final quarter. Thompson stretched the lead to 24-14 with 8:42 left when Thompson had another 4-yard touchdown run.  Hope Christian junior defensive back Timonthy Bell ended the Evangel hopes of a comeback when he intercepted a Thompson pass with a few minutes left.