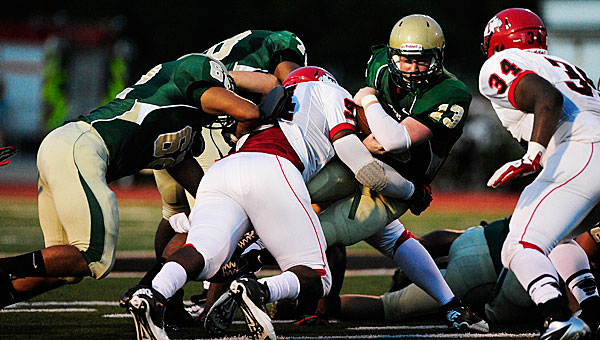 Pelham running back Eli Beall (13) muscles his way through the Thompson defense during Pelham’s Sept. 14 victory over the Warriors at Ned Bearden Stadium. (Reporter Photo/Jon Goering)

The Pelham Panthers held heated rival Thompson to a scoreless first half en route to a 35-20 victory over the Warriors Sept. 14 at Ned Bearden Stadium.

“We finally got off to a good start tonight,” said Pelham head coach Brett Burnett. “It was a good, hard-fought win.”

As a result of the win, Pelham will retain possession of the coveted Game Ball trophy, which is presented to the winner of the PHS-THS game each season, for the fifth straight year.

First-year Thompson head coach Michael Montgomery said he plans to work on the team’s “inconsistent play,” but said he is still living out his dream job.

“Turning this thing around is going to be a doggone challenge, and we knew that,” Montgomery said. “There’s no place I’d rather be, and I’m thankful for the opportunity.”

Pelham compiled 357 total yards of offense in the win, 306 of which were rushing.

Pelham jumped to a 21-0 halftime lead, scoring in the first half on one touchdown run from Moregan Sharp and two from Eli Beall. Austin Bowen added extra points after each touchdown.

The Panthers converted a pair of fourth-down attempts in the first half, and did not punt the ball until late in the third quarter.

The Warriors posted their first points of the night on a 1-yard run from quarterback Trey Matherson and a David Buckalew PAT.

Pelham answered on a 3-yard Beall run and Bowen PAT early in the fourth quarter.

Thompson closed the gap to 28-13 on a 3-yard touchdown pass from Dee Tolbert to Jessee Handlon. Buckalew’s PAT attempt sailed right of the uprights.

The Panthers answered on their next drive, scoring on a 3-yard Sharp run and successful Bowen PAT.

The Warriors posted their final points of the night with 1:37 left in the game when Matherson found Tolbert in the end zone on an 8-yard touchdown pass. Buckalew’s extra point brought the score to 35-20.

The Panthers face a home game against Oak Mountain on Sept. 21.

FROM STAFF REPORTS The Thompson volleyball team picked up their second straight Class 6A, Area 7 win Sept. 12 in... read more