Briarwood falls at home to Patriots 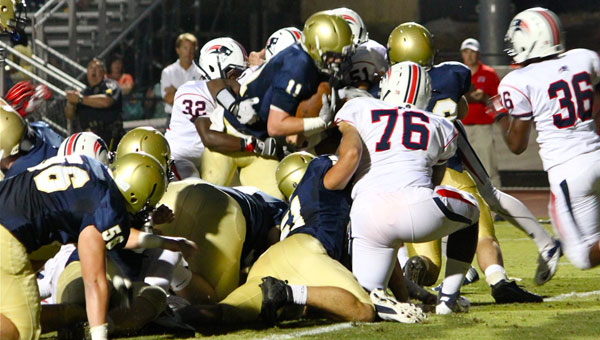 By KALA BOLTON / For the Reporter

NORTH SHELBY – Despite a late surge, the Briarwood Christian School football team fell to the Homewood Patriots 27-12 Friday night, and Lions’ head coach Fred Yancey said inconsistencies on both sides of the ball are to blame for his team’s lack of success to start the season.

“Right now, offensively, we’re just not a competent offensive team at this point,” Yancey said. “Defensively, we’re sometimes really terrific and sometimes, we’re not out there. When that happens, it just means that we have to keep practicing hard and working hard and get to a point where we can keep improving.”

The Lions knew they faced a challenge as Homewood brought with it a stingy defense and a stout running game that racked up 257 yards on the night, but Briarwood held its own during the first quarter as two Homewood turnovers gave Briarwood a chance to get on the board first. Missed opportunities, however, would prove detrimental as Homewood’s defense stopped Daniel Robert just one yard shy of the goalie to close out a scoreless first quarter.

The Patriots came out in the second quarter firing with three unanswered scoring drives, closing the half with a 21-0 lead.

“We’re trying to establish a running game, but we’re not doing very much with that, so that was trouble,” Yancey said. “Our passing game — there’s just so much pressure on the quarterback either form them pressing us or dropping so many in coverage that it’s making it tough.”

Homewood opened the second half with a 60-yard touchdown pass, extending its lead to 27-0. This time, however, Briarwood had an answer. Robert capped off a seven-play, 67-yard drive with a 1-yard touchdown pass to put the Lions on the board. A fumble recovery by Barnes Bankston on the Patriots ensuing drive set Briarwood up for a quick touchdown pass from quarterback Chandler Wilkins to Sam Morris, shortening the gap to 27-12 to close out the third quarter.

“In the locker room we talked about how we just needed to change,” Wilkins said. “We just wanted to show everybody that we can play with these guys, and we showed it for a little bit. We just couldn’t keep it going.”

Both defenses duked it out as the two teams traded three-and-out drives well into the fourth quarter. Despite the production the Lions had in the third quarter, they were never able to catch up to the Patriots.

Having lost starting quarterback Will Edwards to a broken collarbone in the Lions’ jamboree match-up, Wilkins has stepped in as the go-to guy for Briarwood and said he feels more comfortable in his new leadership role as the days pass.

“I’ve been working at this position for a while, and I knew the plays,” said Wilkins, who completed 28-of-50 passes for 155 yards against the Patriots. “I didn’t expect to be [the starting quarterback], but I felt pretty prepared to do it. I’m just now getting used to it, and hopefully next week will be a different outcome.”

While Briarwood fell to 0-3 (0-2) in the division loss, the Lions, with a legacy of football excellence, aren’t giving up hope just yet.