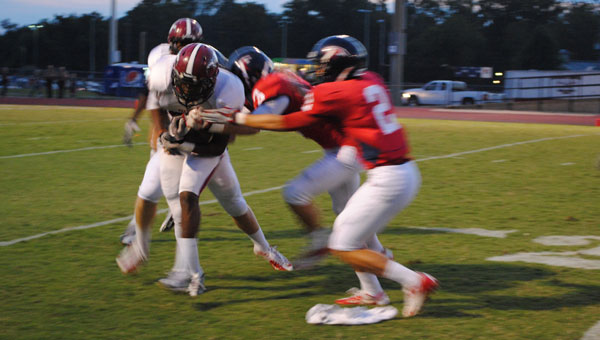 With several different goal-line stands, Oak Mountain’s 10-7 win over Stanhope Elmore was a defensive coach’s dream. For the Eagles, it was a defensive team effort that made the win perhaps even more enjoyable.

“All these guys are absolute warriors, and I’m proud to coach them,” head coach Chris Bell said.  “I’m tickled to be a part of what’s all going on here.”

All of the game’s scoring came in the first half; it was the defenses that took over after the halftime break.

The lone score of the first quarter came on Oak Mountain’s opening drive.  John Michael Miller hit a 30-yard field goal with three minutes to go in the opening quarter.

On the Eagles’ second drive, a Jake Adams fumble was recovered by Stanhope Elmore at the Oak Mountain 8-yard line.  The Mustangs could not convert, after a goal-line stand forced a field goal attempt that sailed wide left.

The Mustangs responded with their next drive four minutes into the second quarter with a one-yard Byron Brower run.  The touchdown was set up by a 33-yard pass from Corbin Shaw to Robert Young.

It took until the waning seconds of the first half for Oak Mountain to regain the lead.  Catches from Scott Hester and Xavier Cochrane set up a two-yard sneak from Adams to put the Eagles up 10-7.

In the second half, the Eagles struggled to get their offense going; each of their six second-half possessions resulted in punts.

With Brandon Wilson running the Stanhope Elmore offense, senior running back Kenterrius Tyre carried the load for the Mustangs in the second half.

In what was supposed to be a lead-changing touchdown drive, Miller and senior Jake Kelley took charge for the Oak Mountain defense. With the Mustangs in a goal-to-go situation, Miller made a key stop of Tyre which resulted in a loss of yardage.

“John Michael Miller made that play in the backfield, and that got them off their rhythm,” Bell said.

Two plays later, Wilson’s pass into the end zone was intercepted by Kelley.

Oak Mountain’s next defensive stand came before the Mustang offense could even get on the field.  Will Taylor recovered a muffed punt to give the Eagles two straight offensive possessions.

With the win, Oak Mountain handed the Mustangs their first loss of the season.  The Eagles will head to Pelham next week with a 3-0 mark in Bell’s inaugural year as head coach.