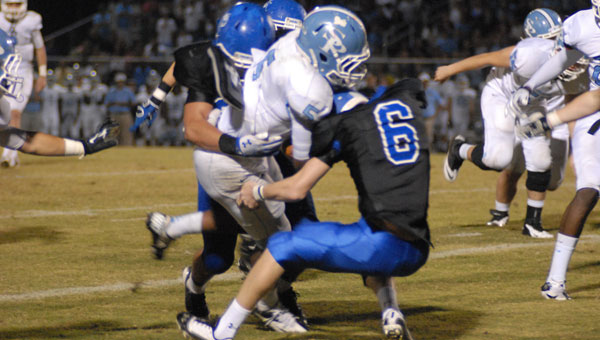 CHELSEA – The phrase “a tale of two halves” could have fit Friday night’s contest between the Chelsea Hornets and the Spain Park Jaguars in their first ever meetingThe first half belonged to Chelsea who out-gained the Jaguars by 106 yards, but Spain Park held the Hornets scoreless in the second half to take the 37-23 victory Sept. 14.

“I’m not pleased with the way we executed a lot tonight,” said Spain Park head coach Chip Lindsey. “But I am so happy with the way our guys battled in the second half against a really good Chelsea football team. Those guys did a great job and were well-prepared and well-coached.”

“It was a hard-fought game on both sides,” Chelsea head coach Wade Waldrop said. “I was proud of our kids’ effort. I thought they played very hard. We made too many mistakes to win and it starts with me.”

Chelsea (2-1) jumped out to a 13-0 lead in the first quarter on a Trent Haggin 22-yard touchdown run and a Julius McCall one-yard score.

The Jaguars broke onto the scoreboard with just 15 seconds left in the opening period when Nick Mullens found Robert Walker on a four-yard touchdown pass to cut the Hornets’ lead to 13-7.

That score stood until midway through the second period when Chelsea took their largest lead of the game. After a Spain Park punt that rolled into the end zone, McCall broke for an 80-yard touchdown to give the Hornets a 20-7 lead.

“I thought we had a good plan,” said Waldrop. “[Spain Park] did a good job of adjusting.”

It took just four plays for Spain Park to answer the McCall score. Mullens connected with Ben Olinger for a 53-yard reception down the middle to guide the Jaguars into the red zone. Two plays later, Mickey Forrest punched the ball in from one-yard out to cut the Chelsea lead down to six, 20-14.

The Hornets extended their lead with just 2:50 left on the clock on a 44-yard field goal by Josh Carpenter to make the score 23-14 at the half.

After Chelsea out-gained the Jaguars 259-153 in total yards in the first half, the second half belonged to Spain Park. The Jaguars pulled back to within four, 23-17, when Thomas Taylor converted on a 35-yard field goal on the Jaguars’ first possession of the second half.

Mullens guided the Spain Park offense to the end zone on their second possession of the third quarter. The senior quarterback threw for 39 yards including a 15-yard pass to Josh Rich to even the score, 23-23.

The Hornets appeared poised to resume the lead when they drove down to the Jaguars’ 33-yard line. Hagin dropped back to pass on fourth-and-five and was intercepted by Spain Park’s Rondaius Jackson. Jackson returned the ball 73 yards for a touchdown to give the Jaguars their first lead of the game, 30-23.

Mullens capped the scoring in the fourth quarter connecting on his third touchdown pass of the game to Jourdan Walker on a 13-yard reception for the 37-23 final score.

The Jaguars’ senior quarterback finished the game throwing for 190 yards.

Spain Park racked up 249 yards of total offense in the second half while the Hornets only mustered 168 yards in the final two quarters.

McCall led the Hornets with 222 yards on 29 carries with two touchdowns while Hagin finished the game with 101 yards rushing on 13 attempts and a score.