Alabaster to be on national TV Sept. 26 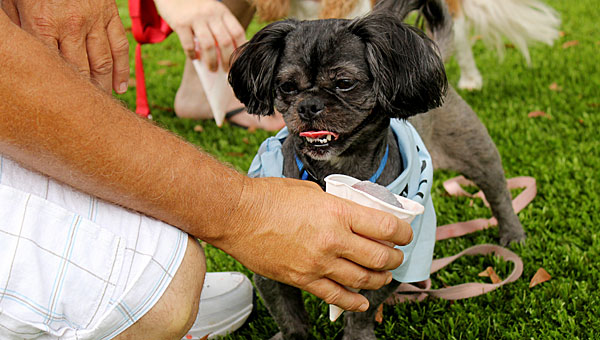 A small dog enjoys a bite of shaved ice during the grand opening ceremony for the Beneful Dream Dog Park in Alabaster. The park will be featured during a Sept. 26 airing of the DIY Network's Desperate Landscapes show. (File)

The network is set to air the hour-long special on the dog park on Wednesday, Sept. 26 at 9 p.m. Central time.

The airing will come a little more than a month after DIY Network crews spent the day at the park filming for the show, said former Shelby County Humane Society Director Jenny Wilson.

During the Aug. 23 filming, Wilson and several local dog owners brought their four-legged friends to the park to enjoy time in the national spotlight. One of the canines featured in the show was Wilson’s dog, Honey Belle.

The Aug. 23 session wrapped up several months of filming for the hour-long special on the dog park.

Last year, Alabaster native Wilson and Honey Belle won the Beneful Dream Dog Park contest, bringing a $500,000 new dog park to Alabaster’s Veterans Park. The contest challenged Wilson to answer the question “If you had $500,000 to create a dream dog park for you and your best buddy, what would you do?”

Wilson said Desperate Landscapes typically focuses on renovating residential properties, but decided to feature the “before, during and after” of the transformation of a vacant lot in Alabaster’s Veterans Park into the dog park.

The park, which is carpeted with synthetic turf, features separate off-leash play areas for small and large dogs, splash pads, agility course elements, a miniature football field, a walking course and more. The park is open to the public daily.

For more information on the dog park, including tips for a successful visit, go to Cityofalabaster.com/beneful-dream-dog-park/sp/529.