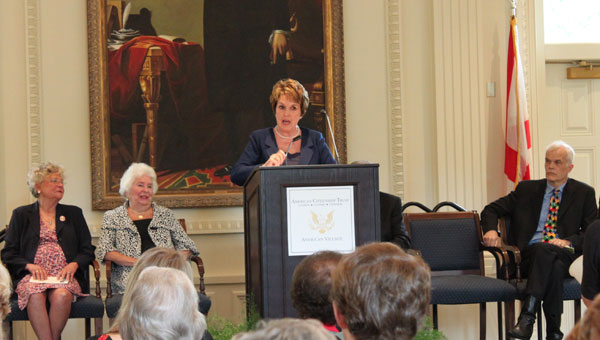 MONTEVALLO – In celebration of the 225th anniversary of the signing of the United States’ Constitution, the American Village hosted the National Summit on Keeping the Republic Sept. 17.

American Village Founder and CEO Tom Walker said the theme of the summit was inspired by what Benjamin Franklin said when asked about the type of government the Constitution outlined.

“(The government is) a Republic, if you can keep it,” Walker quoted of Franklin.

Vaughan Morrissette, board of trustees chair of the American Village Citizenship Trust, welcomed a room full of visitors during convocation in Liberty Hall.

Ivey called the American Village a “stage of American history.”

“Students learn to discover American history, cherish the ideas of liberty and are inspired to serve our country,” Ivey said. “It’s a vital time in our country, and we must recommit to not only preserve the past, but form the future.”

“The American Village is a national leader in helping prepare young children for the most important job they’ll ever have – being a citizen in our great country,” Bush said.

“Thanks to CEO Tom Walker for his vision to create a place where young people can step into history.”

“Mr. (Ben) Franklin and his contemporaries knew keeping the Republic would be hard and unlikely,” Brookhiser said.

Dr. Marquita Davis, finance director of Alabama, and Walker concluded the convocation by encouraging attendees to pledge to keep the Republic.

“U.S. history is at the core of our national memory and identity,” Walker said. “What Americans need is the big-picture knowledge of who we are – who we are and what are those enduring principles.”