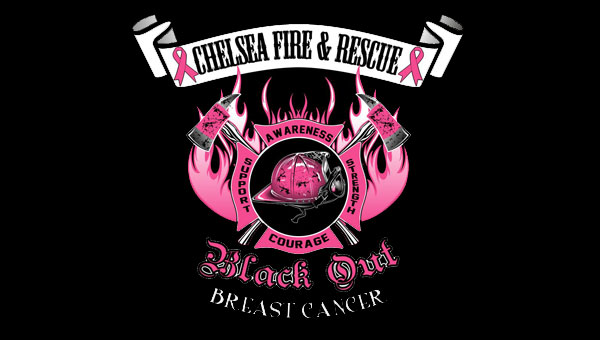 CHELSEA – Following last year’s successful campaign of “pinking out” the city, Chelsea Fire and Rescue are “blacking out” breast cancer during the month of October.

The Chelsea firefighters will wear the Chelsea Fire and Rescue “black out breast cancer” T-shirts throughout October in support of Breast Cancer Awareness month.

“We’ll turn our (fire) station pink again at night. The up lights will be pink this year. It was super cool last year because it really stood out,” said Kathy Shirley, one of the event chairpersons and wife of Chelsea Fire Chief Wayne Shirley.

After debuting the shirts Sept. 1, Kathy Shirley said about 110 shirts sold in a few days.

“People know more about what it’s about this year,” she said.

Shirley said the shirts will be for sale for $15 at Chelsea Day Oct. 6 in front of Chelsea city hall. The black shirts are also for sale in businesses around Chelsea, including Snider’s Pharmacy, Smith Chiropractic and the Chelsea Fire Station No. 31.

Shirley said Chelsea residents should wear their shirts at the Chelsea High School football game Oct. 19 against Pelham to black out the stadium.

“One hundred percent of the profits go to the Breast Cancer Research Foundation of Alabama,” Shirley said. “We decided we wanted to get on board (with the foundation) because so many people have been affected by breast cancer either directly or indirectly. (Last year,) we were able to give a sizable donation, and all that stays right here in Alabama.”

For more information about the Breast Cancer Research Foundation of Alabama, visit Bcrfa.org.