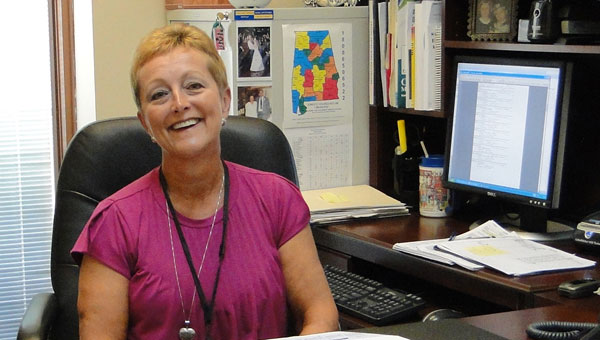 Calera Police Department’s Victim Services is designed to meet the needs of Calera residents who are victims of crime or trauma.

Mitzie Wheat, liaison for the unit, notifies victims of their rights and provides support and advocacy.

Wheat acquired the position when Jim Finn was police chief.

“My sister, Patricia Collum, was murdered in 1991. Five years later I joined VOCAL, an advocacy group for victims, to help me deal with it. Chief Finn knew about my volunteer work, and when he received a grant to provide victim services he called me when he had an opening — that was April 2004,” Wheat said.

Wheat contacts victims by letter, phone or in person to explain what their next step might be. The Crime Victim’s Bill of Rights defines certain rights granted to victims of crime, which includes information about the case, procedural steps, information and referrals to social service providers and availability of victim’s compensation benefits.

“If an officer thinks there is possible danger when he leaves — the victim could be hurt or killed — he does a lethality assessment which consists of 11 questions,” Wheat said. “He then calls SafeHouse and gives the results to the counselor. The victim is pre-approved to go to SafeHouse because the officer has determined it’s a dangerous situation.”

Calera is the first police department in the state to implement the lethality assessment, which is coordinated through the Alabama Coalition against Domestic Violence. The unit works with HICA, The Hispanic Interest Coalition of Alabama, for Spanish-speaking victims.

“I’ve found during all my years of volunteer work that doing something to help somebody else is healing for me,” Wheat said. “I had to find someplace to direct the anger of my sister’s death to benefit me and others.”

Wheat and her husband, Henri, have two children, Wendy (Cremer) and Justin. She is a graduate and retired teacher of Calera High School, where she taught business and computer keyboarding. She drove a school bus for three years while attending the University of Montevallo, a total of 26-1/2 years with the Shelby County Board of Education in 2001 when she retired.

Students and parents gathered on the football field at Ricky M. Cairns Stadium during the second annual Prayer in the... read more