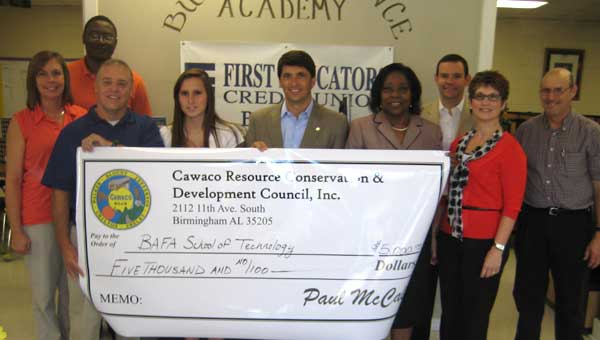 The school will use the grant for its Learning, Growing and Expanding Horizons’ program, which provides students with an opportunity to experience professional experiences in different parts of the country.

Shelby County School Career Tech Coordinator Rene Day said in an interview that the group will use the grant to visit the financial district in New York City. She said the group used a previous Cawaco grant to visit New Orleans.

Students visited New Orleans and gained first- hand experience and leadership skills to revitalize a community following a natural disaster, according to the press release.

Dora Montgomery, School of Technology instuctor, said she was appreciative of the Cawaco RC&D and the partners that have assisted her program to create workforce development opportunities.

“With the support of our partners like Cawaco, South Shelby Chamber of Commerce, business advisory members and local businesses, our students are getting the resources they need to compete,” she said in the press release.

State Senator Slade Blackwell felt Horizons and similar programs would further help Alabama be prepared to fill jobs that are being recruited in Alabama, according to the press release.

“It’s important to show the industries that we recruit, that Alabama has skilled workers to fill jobs as they come to this State,” he said. “ I am proud of the aggressive attitude the School of Technology has taken to develop projects like this, which further illustrates that we are committed.”

Tim Elliff, School of Technology principal, said in the press release that he was pleased with the program and felt that it has broadened the students’ outlook on potential job opportunities. He also thanked Cawaco RC&D, Senator Blackwell and Rep. Mike Hill for assisting in raising funds for the school.

“We know that our state has faced a difficult economic period and that money is tight, but when we work together and partner we can still accomplish a better life for students and the community,” Elliff said.