Whataburger serving people one hamburger at a time 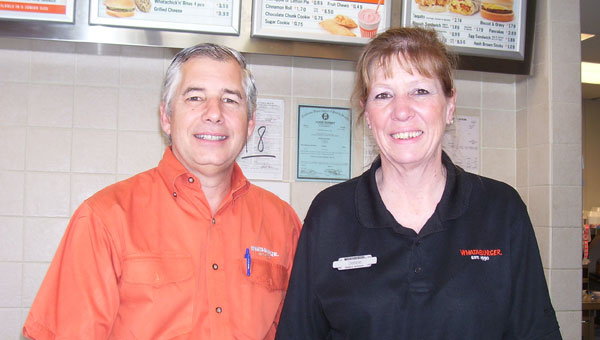 While shopping or running errands in Chelsea I like to stop by WhataBurger to rest, eat and listen to their inspirational music. I like the slogan on their window, too.

Debbie Moore, Whataburger general manager, said she’s learned there are a lot of people in our community who love Whataburger’s values: “Under God We Stand.”

I talked with Debbie and Owner Jerry Baird recently about their values and customer service.

They’re not only serving food, but “serving people one hamburger at a time. A lot of people come through our doors,” Debbie said. “And our smiles may be the only ones they get all day.”

“Debbie has put her heart and soul into this,” Jerry said.

“It’s not just me,” said Debbie. “Everyone here represents the same values. They really care about good service.”

She said one lady drives from Tuscaloosa every week for the service and the food. While we were talking, two military men stationed at Fort Campbell, Ky., came in. They don’t have Whataburger restaurants up there, one said, “So as soon as we get here we come to Whataburger.”

“It helps to let employees know we care what goes on,” Debbie said. “But they don’t just do this for me, but because they care.

“For some of these kids, this is their first job and we’re their only family. If one comes in to talk to me about problems, I try to listen and let them know if they place them in God’s hands, it will make a difference,” she said.

Debbie previously worked in Fultondale, where she lost everything in the tornado, she said.

So, when she was “offered a promotion to move to Chelsea and start over,” she took it.

When not working, Debbie likes to attend church and spend time with her 21-year-old son, who was injured in the military. She also likes to play piano and sing.

Debbie said she starts everyday with God first. “Putting God first can change your life and the way you look at things,” she said. See Whataburger.com or Facebook for more.