Chelsea Fire honors its own 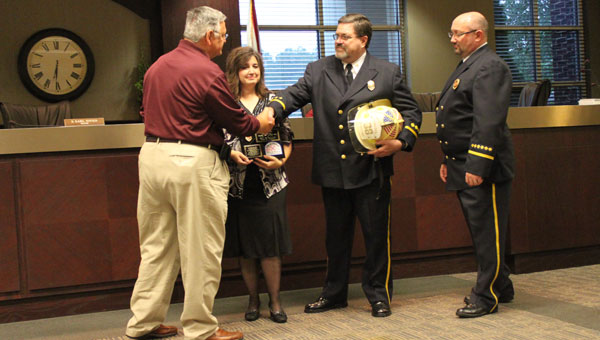 Hampton Vinoski joined Chelsea Fire and Rescue in November 2009, and was named Explorer of the Year in 2010. After graduating from high school in May, Vinoski attended recruit school in Birmingham, and now fills in as paid staff for the Chelsea fire station, Shirley said.

Joel Pugh also graduated from high school in May, and he started recruit school in Gulf Shores.

“He represented Chelsea well in that school,” Shirley said.

Two older members of Chelsea Fire and Rescue were honored for their years of service.

Phillip Bennett joined the department in 2001. He retired recently when his fight with throat cancer took a turn for the worse, Shirley said.

“He is a good friend to a lot of us,” Shirley said of Bennett. “He really was dedicated to our community.”

“In high school, he joined the Navy,” Shirley said of Corn. “He’s had a servant’s heart since he was a young fellow.

“He has been an asset and right hand to me,” he added. “He has been doing it for the right reasons because he’s got a servant’s heart.”

Corn simply thanked the rows of firefighters who sat through the City Council meeting.

“I want to thank those guys back there, my brothers back there, for being so dedicated and loyal,” Corn said.

In other business, the council also:

-Declared Oct. 19 as Black Out Breast Cancer Day in the city of Chelsea.

-Passed a resolution to authorize a change order for the installation of lights at the Chelsea High School football field. The city will pay S&G Waldrop Electric $520 to cover cost of additional equipment.

“The lights will be ready for the next home football game to park cars down there,” Mayor Earl Niven said.

FROM STAFF REPORTS LIVINGSTON, Ala. – The University of Montevallo volleyball team dropped a heartbreaker in five sets Sept. 18... read more