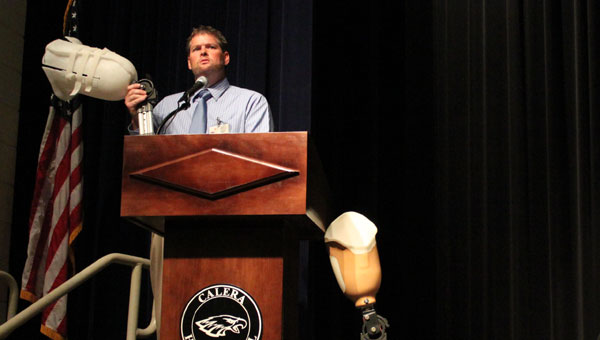 CALERA – Calera High School’s engineering program was named one of 15 model manufacturing programs in the nation by the Society of Manufacturing Engineers.

The SME Education Foundation sponsors the Partnership Response In Manufacturing Education initiative. As a PRIME program, Calera High’s engineering program, taught by Brian Copes, will receive $15,000 from the foundation during the next year.

Copes took 10 students to Honduras this summer to fit 14 amputees with artificial legs the students developed in school. The class has also created a number of basic utility vehicles to provide transportation and ambulance services to underdeveloped countries, such as Honduras.

“I went in for a career day to tell them what I do as an engineer,” Walton said. “Then I met Brian Copes and his students and found out this was a special class.”

When Calera High opened six years ago, Walton knew the school would be the “new home” for the engineering program.

Walton nominated Copes’ program to be chosen as a PRIME school, and Calera High now holds the title.

Copes said the funding would be used to update equipment and expand the program to include more students. He said this year is a “redesign year,” as some components to the basic utility vehicles are no longer available.

Rodney Grover, senior development officer for the SME Education Foundation, said PRIME exists to bring together organizations to support manufacturing, such as the American Foundry Society.

Grover said the investment equals about $45-50,000 over the next three years. This year, $10,000 will be given for Copes to use to build the program, and $5,000 will be earmarked for a youth camp for fifth to seventh graders.

“We need to be sure there’s a pipeline of students who are interested in the program at Calera,” Grover said.

“The work in Calera shows how communities are finding solutions and taking action,” Maxson said. “(PRIME schools) are exemplary manufacturing programs that are true models.”