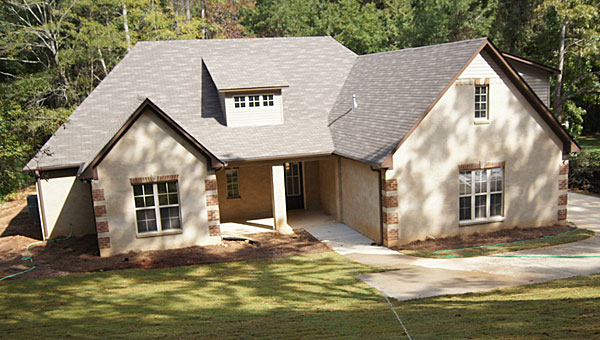 Volunteers recently laid sod and completed some landscaping work at a volunteer-built house for THS alumni Josh Carden and his grandmother in Alabaster. (Contributed)

A local group is preparing to present a new, volunteer-built house to Thompson High School graduate Josh Carden and his grandmother during a Wednesday, Oct. 3 ceremony.

The Josh Carden Project began working to build a new house for Carden after his grandfather was struck by a car and killed in 2010 while he was crossing Fulton Springs Road to help Carden cross the street.

After students at THS worked to raise thousands of dollars in a matter of weeks to help provide Christmas for the Cardens in 2010, Josh Carden Project organizer Jeff Brooks said he was inspired to kick off the home-building project.

Carden, who has cerebral palsy, and his grandmother currently live in a house in a heavy industrial section of Alabaster off Fulton Springs Road. The new house is on a quiet lot off Washington Lane.

“I think it’s pretty amazing. We were just inspired by those kids at Thompson. We see them as an example that other kids can follow,” Brooks said. “I think it’s amazing that we’ve had the overwhelming support we’ve had. Everyone has jumped in behind us to support this project. This project is definitely bigger than us.”

Several local companies contributed materials and labor to the new house during the building process. The house features a reinforced “safe room” to protect the Cardens in the event of severe weather.

On Sept. 15, Josh Carden Project volunteers joined volunteers from Home Depot and BBVA Compass to help complete landscaping around the new house. The project will hold another volunteer day on Sept. 22 to wrap up the landscaping work before the Oct. 3 presentation.

Brooks said the group has not yet finalized the details of the presentation, and said a time will be announced over the next few weeks.

“It will definitely be on Oct. 3,” Brooks said.

For more information on the project, including ways to volunteer, visit Facebook.com/joshproject.