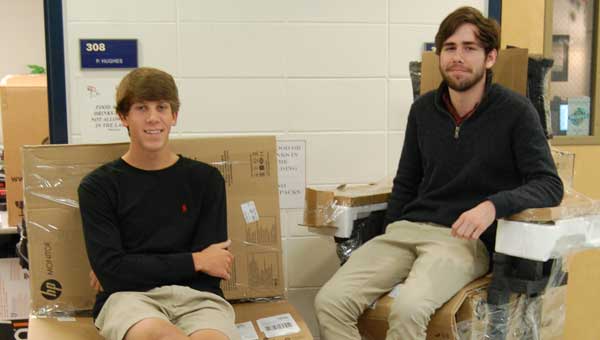 Oak Mountain High School teacher Paula Hughes found herself with a surplus of computer boxes and packing material at the beginning of the school year.

Hughes, who is teaching the school’s new aerospace engineering class, had scores of leftover computer boxes and foam after setting up her classroom. Instead of trashing the boxes, she decided to use them for her students’ first project.

Using a set amount of tape, foam and cardboard, each class had to create a functional chair.

“They had to decide as a class what the design was going to look like,” she said.

The chairs had to be functional, lightweight and aesthetically pleasing, and were judged Sept. 19 by three OMHS staffers.

Kaitlyn Hill, a 14-year-old freshman, said her class’ chair allows the user to lean back without breaking it.

“We tried to use a layer system to distribute the weight evenly,” she said.

Hughes said the point of the project was two-fold. First, it put the leftover boxes to good use. More importantly, it gave the students a starter project for the class.

While cardboard chairs have little to do with aerospace engineering, the skills used in creating the chair do.

The students will use the same skills – refined after they study engineering design and drawing – throughout the semester as they study natural winged flight, propulsion, Bernoulli’s principle and gliders.

Rene Day, the career tech coordinator for Shelby County Schools, said the idea for the engineering program developed with input from students and parents. In addition to student feedback, Day looked at OMHS graduates’ career paths and found that many go into engineering.

“Aerospace is one of the fastest growing industries in Alabama,” she said. “We looked at what the future work force is going to look like.”

The school received a $50,000 grant from the Alabama Department of Education to launch the engineering program.

Hughes said many of her students are interested in aerospace engineering as a career path.

Hayel Shamsuddin, a 17-year-old junior, hopes to study structural engineering at the University of Alabama. He said the class has helped him with basic engineering principles.

Hill wants to be a medical missionary, but she has still enjoyed the class.

“I’m always interested in the ways things work,” she said. “I love building things. It kind of makes me amazed at everything God has created.”