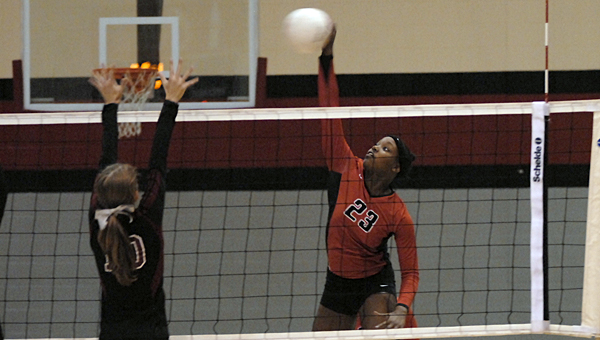 Thompson's Kelsea Bivins scores a kill past a Prattville defender in the Warriors' 3-1 loss Sept. 18. Bivins finished the game with a team-high 13 kills with three blocks. (Reporter photo / Mickel Ponthieux)

Prattville led as much as five points in the first set until they closed on a four-point rally to take the 25-18 win.

The Warriors made a change in the lineup in the third set and it paid off immediately. Thompson jumped out to a 5-1 lead and never trailed to take a 25-18 win. Kelsea Bivins scored five kills in the set to lead the charge.

“We made a change in our lineup and we got the ball to our big hitters,” said Thompson head coach Kellyanne Gandy. “That was a big momentum swing.”

Prattivlle answered by taking a 6-0 lead in the fourth set. Thompson rallied back to tie the set 16-16, but the Lions closed the set and the match on a 9-6 rally to win 3-1.

Bivins led Thompson with 13 kills in the match along with three blocks. Katie Guiser added eight kills with a team-high 12 digs. August Newberry had 10 digs and three aces with Tara Miller contributing 17 assists and a pair of aces.

The Warriors will return to action on Friday, Sept. 21 at the Over the Mountain Tournament held at Hoover High School.