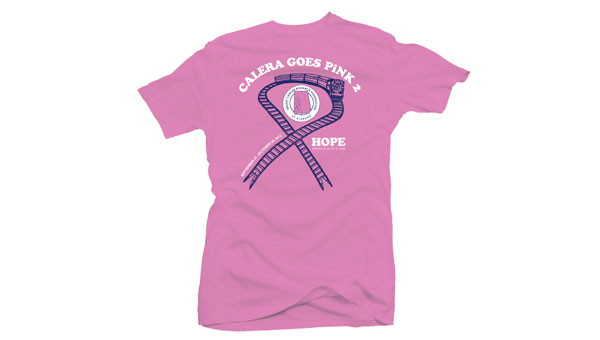 CALERA – The city of Calera will once again partner with the Breast Cancer Research Foundation of Alabama to raise money for life saving breast cancer research.

Last year, Calera raised more than $17,000 for BCRFA, and city officials hope to exceed last year’s amount, according to a press release from the BCRFA.

“I am excited about our entire community’s involvement in such a worthy cause,” Mayor Jon Graham said in a press release. “We hope to beat last year’s mark by raising more money throughout the month of October.”

The Calera event is something the city started last year,” said Kate Kiefer, vice president of the BCRFA board. “Because they’re playing Shelby County this year, we invited them to participate. Their shirts are a little darker color, but the whole stadium will be pink.

“A little over 1,000 shirts were sold between Calera and Columbiana,” Kiefer added. “It’s been a real good community effort. We hope to raise well over $25,000. We’re on track to get above the 25 mark.”

According to the release, Calera will also be honoring local breast cancer survivors and their families at the football game.

From Oct. 1-Oct. 30, participating Calera businesses will be selling pink paper ribbons for $1 “in honor of” or “in memory of” friends and family, the release stated.

Participating businesses will also be selling “chance to win” tickets for $1. Ticket holders may win one of several donated products or services by the participating Calera businesses. Drawing will be Oct. 31, and participants do not have to be present to win, the release stated.

The “Calera Goes Pink 2!” finale is a four-person team golf tournament hosted at Timberline Golf Club on Monday, Oct. 29. Player registration is $100 per person with a portion of the proceeds going to the BCRFA. Golfers must have a USGA handicap and be registered by Oct. 19. Interested participants should contact Joe Kruse at Timberline Golf Club at 668-7888 or jkruse@timberlinegc.com.

For questions or information regarding events, please contact the BCRFA office at 996-5463 or visit Bcrfa.org.