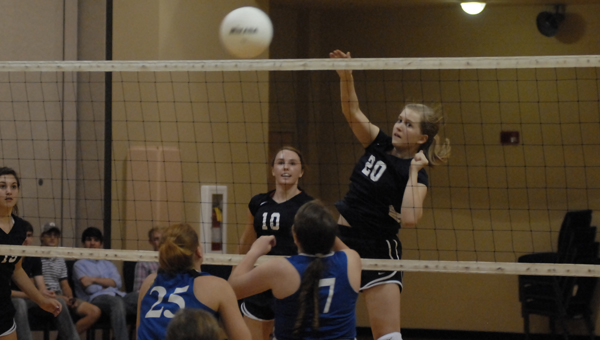 Evangel coach Caprice Lawrence said this was the best she had seen the Lightning play as a team.

“For me to watch them play like that-it was a thing of a beauty,” Lawerence said.

Hope coach Steve Howe said his team played with a lot of heart, but did not play well.

“We didn’t communicate and do the things that we needed to do to give them a good match,” Howe said. “They are good, strong and very well-coached. Unless you play your top game, you aren’t going to stick with them. We weren’t there tonight.”

Hope was led by Joelle Reed, Glennleigh Boyd, and Lindy Walker, who each had a kill.

Evangel took no time taking control of the first set jumping to a 10-4 lead and cruised winning 25-11.

Hope actually led 6-5 in the second set, but after the game was tied at eight, Evangel closed the game on a 17-5 run.

In the third set, Evangel again took a big lead at 6-1 and kept piling it on, finishing the game on a 19-1 run.

FROM STAFF REPORTS MONTEVALLO – For the first time in school history, a men’s basketball game played on the University... read more