Panthers even score against Chelsea 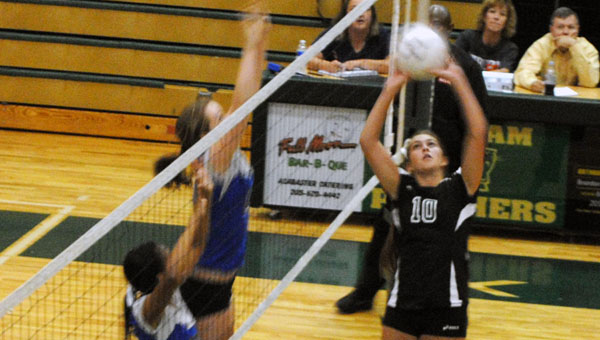 PELHAM – If three points had gone a different way, Chelsea would have recorded a road sweep against Pelham.

Extending the first two games to win, however, the Panthers pulled off a 3-1 victory over their class 6A rivals on Sept. 20.

“They beat us really close in four at their place, and we beat them fairly close at this place,” Pelham head coach Perry Robinson said.

The Hornets entered set point in each of the first two sets, but Pelham pulled away to win both games.

In the first set, the Panthers’ first lead was at 25-24 after keeping within three or four points the entire game.

In the second set, Chelsea fell behind 9-3 but fought to regain the lead with strong service from freshman Madison Turner.

After going up 11-10, the Hornets continued to fight off Pelham until they reached game point at 24-21.

The Panthers took the game’s next five points, coming from behind yet again to win.

“We’re close in the way we play, but we play with different styles,” Robinson said. “Our advantage is that we’re a little bit bigger at the net, so we were able to get in the position at the end to put the ball down.”

Junior Caitland Smith led the way for Pelham down the stretch in both sets, recording key points to help the Panthers go up 2-0.

“She is our driving force offensively,” Robinson said. “When she gets hot it makes it easier for both our outside hitters.”

After falling behind early, the Hornets eventually pulled ahead 19-10 in the third set.  A late rally by Pelham put them within five points, but it wasn’t enough to overcome the deficit as Chelsea finally won its first and only set of the night.

Pelham recovered and never trailed in the final game.  They steadily extended their lead from a four-point spread at 6-2 to the final difference of nine points.

“Our teams are very competitive against each other,” Chelsea coach Jamie Gill said. “We’re ready for the challenge the next time we meet them.”

Moving on, the Hornets face two class 6A opponents next week in Oak Mountain and Spain Park, while the Panthers will face Spain Park on the road in their only match next week.