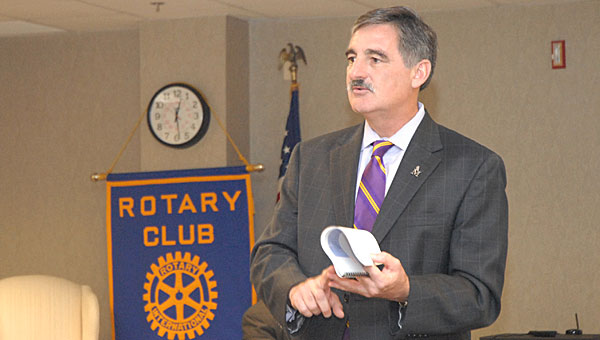 University of Montevallo President John Stewart touted his university’s affordability and value while speaking about the school’s rapid growth during a Sept. 20 meeting of the Alabaster-Pelham Rotary Club.

During the meeting, Stewart said UM welcomed its largest freshman class in 14 years this fall, and said the university has recorded steady growth over the past few years, especially in the College of Business.

“We were really down in the College of Business. Enrollment has been up 35 percent in that college over the last two years,” Stewart said.

Stewart said UM, a public university, is able to offer amenities similar to many private schools at a fraction of the cost, and said he and other UM officials are working to market the university to a wider audience.

“We look a lot more like an elite private university for the price of a state college,” Stewart said. “We are offering a great product on a beautiful campus.”

UM officials recently looked at “20 of the top private schools in the South,” and compared them to Montevallo. The private universities had an average student-to-teacher ratio of 12-1, while UM’s was at 17-1.

Stewart said, on average, about 92 percent of instructors at the private colleges had a doctorate or terminal degree in their field, which was slightly lower than Montevallo’s 95 percent.

Average yearly tuition for the private schools was about $43,000, while Montevallo is “just a hair over $13,000,” Stewart said.

“We are selling a Mercedes for the price of a Geo Metro,” Stewart said, noting many UM graduates have gone on to law school and medical school, and have led successful businesses. “An average student finishes Montevallo with half the amount of national average debt.”

“Some will be new construction, but most of it will be taking care of deffered maintenance items,” Stewart said, noting the school is preparing to replace air conditioning systems, roofs and cobblestone streets. “We’ve been putting those things off too long, and we don’t need to put them off anymore.”

FROM STAFF REPORTS MONTEVALLO – For the first time in school history, a men’s basketball game played on the University... read more