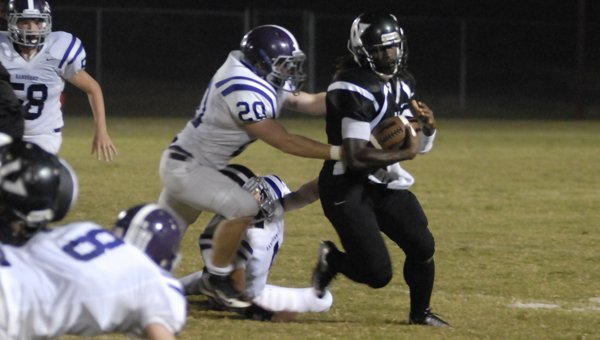 Second-year Vincent coach Zeb Ellison was disappointed with his teams’ performance despite the win.

“First half, we did everything we were supposed to do,” Ellison said. “Second half, we were a completely different football team.”

Vincent was led by junior running back Rodney Groce with 113 yards and two touchdowns on seven carries.  Ryan Kelow added an interception and fumble recovery touchdown for the Yellow Jackets.

Vincent did not waste any time putting points on the board as Groce ran in a five-yard touchdown run at the 9:53 mark first quarter. The Yellow Jackets added the two-point conversion to extend the lead to 8-0.

After a quick Ranburne touchdown, Johnson ran in a 3-yard touchdown run and Ryan Kelow added the extra point to put the lead at 23-6.

Vincent’s defense got in on the scoring when Kelow picked up a Ranburne fumble and returned it 66-yards for a score.  The Yellow Jackets added another successful two-point conversion and the teams went in to the half with Vincent leading 31-6.

In the fourth quarter, Vincent self-destructed with turnovers and penalties. Vincent sophomore receiver Jace Green was actually ejected for throwing a punch midway through the quarter. These mistakes by Vincent allowed Ranburne to score two touchdowns in the final quarter.  The Bulldogs also had two other drives deep into Vincent territory, but were stopped by the Yellow Jacket defense.

“We are not a mature football team yet,” Ellison said. “We’ll get there, just got to take it one day at a time.”