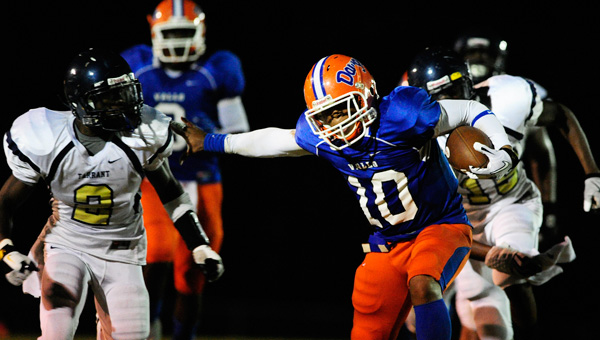 Montevallo's Ronezz Stevens stiff arms a Tarrant defender during a rush in the game at MHS on Sept. 21. (Reporter Photo/Jon Goering)

MONTEVALLO – The Montevallo Bulldogs defense attacked Tarrant to give their head coach his first victory in a 26-7 victory Friday night.

“It was a great win, we definitely needed it,” said Montevallo head coach Andrew Zow after winning his first game at the school. “We fought hard and the guys gave a great effort throughout the game.”

“Defense was something this week we felt like we needed to hang our hat on,” Zow said. “They did a great job. We got a couple of picks and scored on one of them. Overall, our defense played one of their best games all year.”

Montevallo struck first when Trevor Chatham found Landon Goodwin for a 22-yard touchdown pass for a 7-0 lead after Quintezz Stevens converted on the extra point.

The score stood until 52 seconds before the half. The Bulldogs’ Michael McKenzie picked off the Tarrant quarterback and ran 70 yards on the return for a score and a 13-0 Montevallo lead at the half.

Ronezz Stevens opened the second half scoring on a 6-yard touchdown followed by Quintezz Stevens PAT for a 20-0 lead with 6:40 remaining in the third. Chatham found Goodwin again, this time for a 62-yard pass for a touchdown to give the Bulldogs a 26-0 lead.

Tarrant scored its only touchdown on a 93-yard kickoff return by Jamal Groom.

Ronezz Stevens led the Bulldogs with 114 yards rushing on 13 carries and a touchdown. Chatham threw for 86 yards and two touchdowns on 3-of-13 passing and two interceptions.

McKenzie and Aaron Terrill each had interceptions for Montevallo with Terrill also picking up a Tarrant fumble. Chase Inabinett recovered two Tarrant fumbles on defense.

Montevallo will host West Blocton in Week 5 action on Sept. 28.