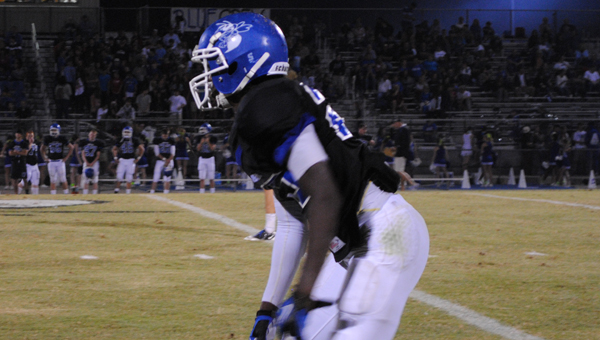 Chelsea's Austin Washington had a 50-yard touchdown reception along with an interception on defense in the Hornets' 47-7 loss to Stanhope Elmore Sept. 21. (Reporter photo / Clayton Hurdle)

“He’s got a lot of ability, and when he makes his mind up that he’s going to play, he can do it,” head coach Jeff Foshee said.

The first two of Tyre’s scores came in the first quarter.  After Chelsea got on the board first, Tyre scored his first touchdown of the night with eight minutes to go in the quarter on a 59-yard scamper.  He evaded several tackles on the way to the end zone.

His second score came with two minutes to play in the first; a 24-yard dash put the Mustangs ahead for good.

Stanhope started in a quick hole, throwing an interception to Taylor Martindale on its first play from scrimmage.  The Hornets capitalized with a 50-yard scoring pass from Trent Hagin to Austin Washington exactly two minutes into the game.

From there, it was all Stanhope Elmore.  The Mustangs answered with Tyre’s 59-yard scoring run and two possessions later recovered a Chelsea fumble in Hornet territory to set up his second touchdown.

Stanhope Elmore recovered another Chelsea fumble as the first quarter ended and capitalized by recording a three-and-a-half minute drive which ended on a three-yard Deandre Beck run.

On Chelsea’s ensuing possession, defensive back Willie Ezell returned a Hagin pass for a touchdown, putting the Mustangs up 27-7 after a failed extra point attempt.

The final score of the second half came with half a minute left.  A 30-yard pass from Stanhope’s Brandon Wilson to Roger Young ended a 97-yard drive for the Mustangs.

The Mustangs opened the second half with a 70-second, three-play drive.  Tyre’s final score of the night came on a 34-yard run.  This followed a 15-yard Tyre run and Wilson connecting with Byron Brower for 12 yards.

The game’s final score was an 80-yard throw-and-catch by Stanhope Elmore’s third-team offense in the fourth quarter.  After the Mustangs’ second missed extra point, the final score stood at 47-7.

“It was supposed to be just a little stop, but they turned it into something more,” Foshee said. “We weren’t trying to run up the score, the quarterback just made a play.”

In addition to Tyre’s productive night, Beck had performed well from the backfield for the Mustangs.  The senior added over 70 yards to Stanhope Elmore’s rushing totals in the second half alone, including a 52-yard dash down the right sideline late in the third quarter.

A scary moment occurred early in the third quarter when Chelsea lineman Troy Marshall spent over five minutes on the ground with an arm injury.

Fortunately for the Hornets, the injury did not appear to be too serious once the training staff stabilized Marshall’s left arm.

Chelsea moves on to its game at Tarrant next week with hopes of improvement from a performance head coach Wade Waldrop calls a “disappointing effort.”

“We weren’t ready to play and we got beaten by a very physical football team,” Waldrop said.

Montevallo's Ronezz Stevens stiff arms a Tarrant defender during a rush in the game at MHS on Sept. 21. (Reporter... read more