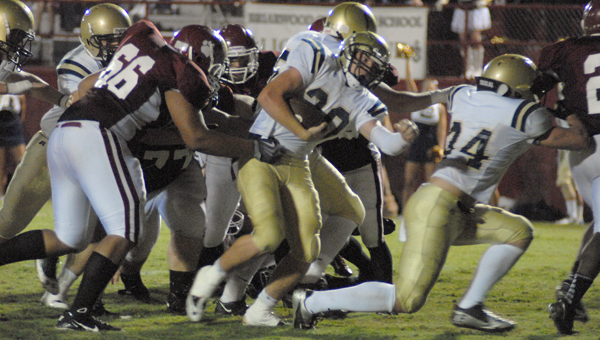 Briarwood Christian's Ethan Simmons rushes in one of his two touchdowns in the Lions' 43-7 win over Shelby County Sept. 21. (Reporter photo/Mickel Ponthieux)

COLUMBIANA – The Briarwood Christian Lions overcame three turnovers in the first half to capture a 43-7 Class 5A, Region 4 victory over the Shelby County Wildcats Sept. 21.

“I was pleased that even though we were making mistakes, the kids were trying so hard,” Briarwood head coach Fred Yancey said on his team’s effort. “They were hustling and started playing good football.”

The Wildcats (0-4) struck first by turning a Briarwood fumble into points. Midway through the opening period, Brandon McGill recovered a Lion fumble caused by Jacob Tidmore to set Shelby County up with the ball on the Lions’ 16-yard line. Three plays later, Martarius Mcgregor rushed in from six yards for a 7-0 lead.

Briarwood (1-3) wrapped up the quarter with a score by capitalizing on a Wildcat miscue. The Lions forced Shelby County to punt and that’s when things got bad for the Wildcats. Punter David Watkins was forced to field a snap that sailed over his head and covered the ball at the Shelby County 5-yard line.

On the Lions’ first play from scrimmage, Ethan Simmons rushed in from two yards out for a touchdown to draw Briarwood within one, 7-6 at the end of the quarter.

Briarwood broke the game open in the second scoring 23 unanswered points to take a 29-6 lead at the half. The Lions took their first drive of the second quarter 57 yards which was capped by a 35-yard touchdown run by Victor Jerald. A two-point conversion gave the Lions a 14-7 advantage.

Lions’ quarterback Stewart Wilkins led his team on an 88-yard scoring drive with four minutes remaining while completing just two passes. Wilkins found Brayden Housel down the middle for a 56-yard reception, then connected with Daniel Roberts one play later on a 25-yard touchdown pass. Another two-point conversion extended the Briarwood lead to 22-7 with just over two minutes left in the first half.

Shelby County was forced to punt for the sixth straight time with 1:36 left in the second quarter when the Lions created another scoring opportunity. Briarwood’s Jordan Carroll broke through the line and blocked Watkins’ punt and Dyson recovered the ball and took it into the end zone for the defensive touchdown and the 29-7 halftime score.

“Early on (in the game) we were doing pretty good, but with four minutes left in the half we had a couple bad snaps on punts that gave it to them on a short field,” said Shelby County head coach Brent Smith. “You can’t give a team like that a short field and they stuck it in.”

Briarwood took their first possession of the third quarter 57 yards capped by a 10-yard touchdown pass from Wilkins to Alexander Bisignani to make the score 36-7, Lions.

Midway through the third, Jerald returned a Wildcat punt 25 yards to set the Lions up at the Shelby County 5-yard line. Briarwood capitalized on the excellent field position when Wilkins connected with Richard Woods to cap the scoring for the 43-7 final score.

“Our kids have been working hard enough and I felt like a win was going to come,” said Yancey on picking up the Lions’ first win on the road.

Wilkins finished the game throwing for 254 yards on 15-of-26 passing with three touchdowns. Jordan DePaolantonio led the Lions with 36 yards on eight carries. Housel caught four passes for 97 yards.

Ty Proctor provided the offense for Shelby County by rushing for 94 yards and throwing for 34 yards. Mcgregor added 85 yards rushing with a touchdown.

“Ty played well and competed out there,” said Smith on his quarterback. “All of our kids are competing. We just have to improve a little bit and get better.”

Shelby County will return to action Sept. 27 when they travel to Calera. Briarwood will host Gardendale.

By Griffin Pritchard / Wetumpka Herald WETUMPKA – The Wetumpka Indians refused to go quietly into that good night in... read more