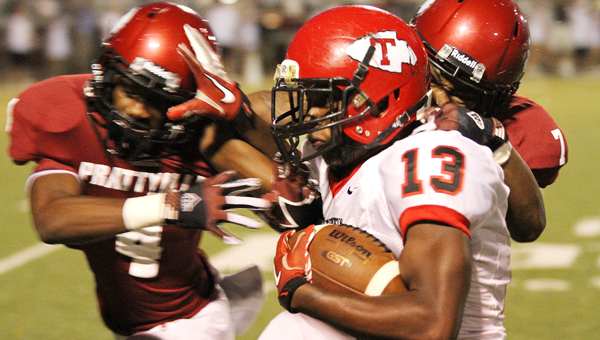 PRATTVILLE – The Thompson Warriors traveled to Prattville to face a tough Region foe in the Lions.  Prattville started slow, but came on in the second half to secure a 33-10 victory.
Thompson used a balanced attack of run and pass to move the ball down the field and with 5:46 remaining in the first, Dee Tolbert punched it in from the one.  A David Buckelew point after attempt made it 7-0, Thompson.
After the Lions drove deep into Thompson territory, the defense again made the big play and held them on 3rd and 7.  Prattville settled for a 26-yard field goal.
Quarterback Trey Matherson having a more productive night in the air, directed the Warriors into the Red Zone again by spreading the ball around the field.  Buckelew came in and nailed the field goal to give Thompson a 10-3 lead at the end of the first quarter.
Prattville then found there rhythm on the ground as they used a powerful ground game to add 17 unanswered points before the half.  The Lions finished the night with 344 rushing yards.
“Our guys played a tough game tonight and gave themselves a chance to stay in it early,” stated Coach Michael Montgomery.  “We will go back and continue to build on this and come up with new fresh plays as we prepare to face Shades Valley next week.”
The Warriors struggled on offense in the second half, as cramps, depth and youth took its toll.  Matherson finished the night 16 of 32 for 211 yards.  Tolbert led all receivers with 101 yards.

Thompson's Kelsea Bivins scores a kill past a Prattville defender in the Warriors' 3-1 loss Sept. 18. Bivins finished the... read more