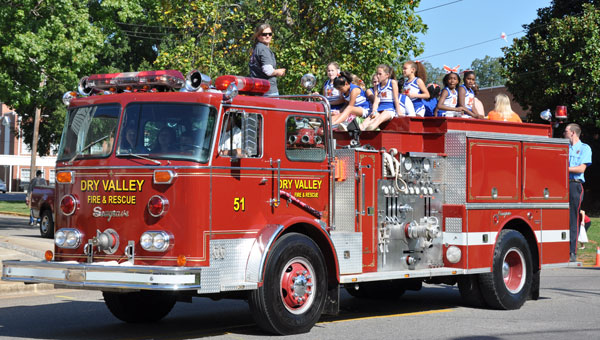 MONTEVALLO – The 36th annual Montevallo Fire Prevention Parade will offer the typical stream of fire trucks, as well as the beginnings of a new tradition: An old-fashioned fire muster.

One of the competitions will involve an “old-timey bucket brigade” in which firemen will toss buckets of water on a constructed house with gutters,” said J.D. King. The gutters empty into a barrel, and the team to fill the barrel the fastest is declared the winner, according to King.

“This is something they’ve never done before,” King said of the muster. “They normally just have the parade, then have a lunch for the parade people. This is bringing a new element to it to get the community involved.”

“We’ve been trying to make it a more community day,” Broadhead said. “People liked to come and see the trucks, but we didn’t really get the fire safety out there.”

The Alabama Power safety trailer will be on hand at the fire muster, as well as fire demonstrations and sprinkler safety. The fire trucks from the parade will line up in Orr Park for demonstrations, as well.

The community fire safety day and fire muster is sponsored by Montevallo Fire and Rescue, the Alabama firefighters’ museum and educational center and the Alabama Bucket Brigade.

The firemen will be tossing candy from the fire trucks during the fire prevention parade, Broadhead said. Anyone wishing to donate candy to the event can take bags of candy to the Montevallo Fire Station No. 1 on weekdays between 9 a.m.- 4 p.m.