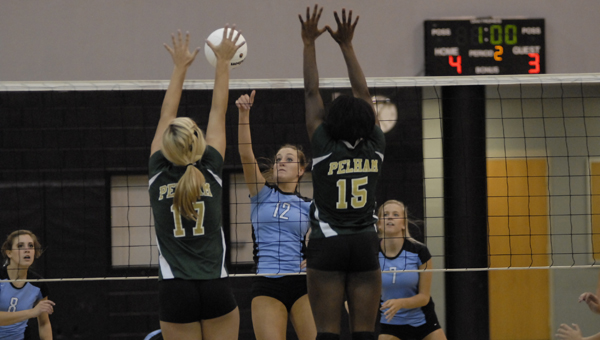 Spain Park bounced back in the second set and led all throughout. The Jaguars closed with a 6-1 rally to take a 25-17 win to even the match 1-1.

The decisive fourth set looked much like the first with both teams battling for control of the match. Spain Park used a 5-1 run to close within one, 15-14, but the Panthers’ Haeden Tucker scored two aces to lead Pelham on a 6-0 run for a 21-14 advantage.

The Jaguars answered with a 6-1 run of their own while taking advantage of four Pelham error to cut the deficit to two, 22-20. After a Spain Park error, Autumn Wild Hiett scored a kill for match point and Emily Jackson won the game 25-20 with an ace.

Thompson's Taylin McCarver puts down a kill in the Warriors' 3-0 sweep of Stanhope Elmore Sept. 25. (For the Reporter/Eric... read more