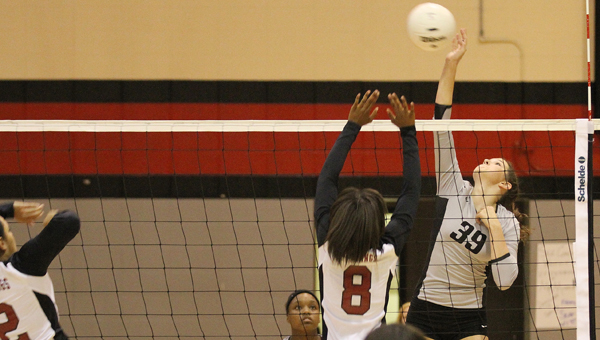 Thompson's Taylin McCarver puts down a kill in the Warriors' 3-0 sweep of Stanhope Elmore Sept. 25. (For the Reporter/Eric Starling)

ALABASTER – Thompson High School coach Kellyanne Gandy said her team accomplished the goals they set out to achieve in Thompson’s  3-0 (25-8, 25-11, 25-7) sweep of Stanhope Elmore High School on Sept. 25 at Thompson.

“Our goal was to maintain serve throughout all three games and I thought we did a great job with that,” Gandy said. “Also anytime they sent the ball back over we did a good job of controlling that ball, running our offense and being able to put that ball away quickly.”

The Warriors were led by Kelsea Bivens with eight kills while Tara Miller added 11 assists and six aces.

In the second set, Thompson again used another big 9-1 run to turn around a 3-2 deficit into a 11-4 lead. Stanhope Elmore cut the score to 12-7, but did not get any closer as Thompson put the game away finishing on a 13-4 run.

Thompson surged in the third set jumping to a 10-1 lead.  Stanhope Elmore could not recover and Thompson won 25-7.