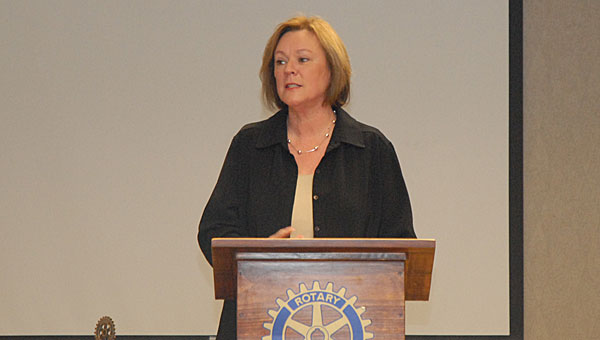 During the lunch, TMS Principal Jeff Atkins said Pugh put in many hours over the summer compiling daily schedules for special-needs children at the school.

“She was the perfect recipient for this award,” Atkins said. “When (Rotarian) Mr. (Neil) Bailey called and asked if I wanted to nominate someone for the award, I knew immediately who I wanted to bring up.”

Pugh, a UAB alumni and member of Westwood Baptist Church, received a plaque and a donation from the Rotary Club to use in her classroom. Before coming to TMS, Pugh worked as a special-education teacher in Walker County and at Columbiana Middle School.

“She is committed to making a positive impact in the lives of students,” Atkins said.

“This is such an honor. I’m grateful to Mr. Atkins for nominating me for this award,” Pugh said.