Church gearing up for pumpkin patch 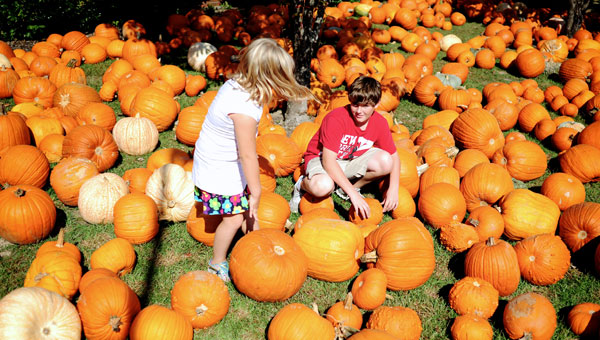 Seth and Lauren MacMillan search for the perfect pumpkin at Alabaster's First Presbyterian Church in 2011. Pumpkins go on sale again on Oct. 1. (File)

Members of the Alabaster First Presbyterian Church are gearing up to unload nearly 4,000 pumpkins to prepare for one of the church’s best-known annual traditions.

A semi truck full of pumpkins grown in New Mexico is scheduled to arrive at the church on Sept. 30. When the truck arrives, dozens of church members will be on hand to help place the thousands of orange orbs around the church, which is located at 8828 Elliotsville Lane off Alabama 119 south.

“It’s a major task. I’d say we have probably 20 or 30 people out there when the pumpkins are delivered,” said First Presbyterian member Candy Glaze. “Some people get up in the back of the truck, and the rest line up and form a chain. We just pass them down until they’re all unloaded.

“The church members put in a lot of work. Even after the pumpkins are unloaded, we have to make sure we turn the pumpkins so they don’t rot on the bottom,” Glaze added. “Everyone participates.”

After the unloading session, the pumpkins will go on sale at the church beginning Oct. 1. Sale hours will be Monday-Saturday from 11 a.m.-8 p.m. and on Sundays from noon-8 p.m.

The pumpkins are grown on land leased on a Navajo Native American reservation in New Mexico, and have been shipped to the church for the past 12 years, Glaze said.

“We used to get a half-semi, but have grown so that we use a whole truck,” Glaze said.

All proceeds generated through the pumpkin patch are used to benefit local charities and nonprofit organizations, such as SafeHouse, Shelby Emergency Assistance and The Foundry. In the past, the donations have also helped victims of natural disasters, such as Hurricane Katrina and Alabama’s 2011 tornadoes.