CHELSEA – Chelsea’s 3-2 win over the visiting Spain Park Jaguars had everything you would expect to be in a rivalry game: a close score, stellar team and individual performances, and a few disputed officiating calls.

“The referee called it good, that we got our hand underneath it,” Chelsea coach Jamie Gill said. “I don’t know if he put his hand to the wrong side of the court at first…but in a crazy, wild game like this one that’s what happens.”

The call came at the end of a very long volley between the two teams; the Jaguars hoping to get another chance, the Hornets trying to clinch the win.

Apart from the aberrational 25-10 Spain Park win in the fourth set, the match remained close throughout. The first game went into extra points; the Jaguars held on to win after giving up three straight opportunities for set point at 24.

The next two sets were nearly identical throughout. In both game two and game three, Spain Park gained the first point, but Chelsea pulled ahead to a four point lead in each. In game two, the Hornets’ biggest lead was 19-13; in game three, the biggest lead occurred when the score was 8-4. 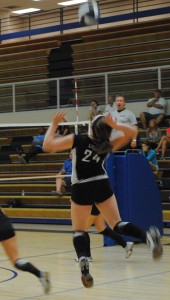 Chelsea's Madison Turner prepares to play the ball over the net in the Lady Hornets' 3-2 win over Spain Park in Class 6A, Area 8 play. (Reporter photo/Clayton Hurdle)

In each of the two sets the Jaguars were within one point of Chelsea late in the set; the closest they got in the second set was 21-20 and the score in set three was 23-22 before the Hornets could score the last two points.

“It’s expected every time we meet that they’ll play us hard,” Gill said. “They’re a great team and we play very similar to each other.”

The Jaguars took over the fourth set early on. Trailing 8-5, Spain Park took a 13-0 run before giving up Chelsea’s next point. Senior Kylie Beaubien, junior Morgan Scott and sophomore Jordan Nakayama took over at the net, combining for seven kills and three blocks in the Jaguars’ hot streak.

Spain Park ended up winning the set on a 20-2 run; after giving up two straight points to Chelsea the Jags closed out the game by scoring its last seven points.

“My girls just happened to get on top in that set by playing nearly perfect,” Spain Park coach Paula Dill said.

Spain Park’s strong fourth game forced a fifth set. After scoring the game’s first point, the Jaguars’ attack cooled off, allowing Chelsea to pull out to an early 4-1 lead.

After the Jags tied the set up at 5 thanks to a Kendall Jones service ace, the Hornets went off on a 6-1 run. Beaubien and junior Madison Bearden kept Spain Park in the game, however; a strong kill by Bearden pulled the Jaguars within two while facing match point.

The night’s final volley lasted over two minutes and finally ended when Chelsea saved an apparent Spain Park kill from hitting the ground. The initial indication from the head official was that Spain Park had scored, but a large cheer escaped from the Chelsea fans when he determined that the pancake play was successful.

“We stress being mature and performing as a program that’s not about the individual but the team, and they do,” Dill said. “It’s just heartbreaking that we’re not able to give them what they’ve worked for. They deserved to win, but Chelsea played an amazing match as well.”

Calera senior running back Sam Adams puts a stiff arm on Shelby County's Jose Salazar-Vazquez on his way to the... read more