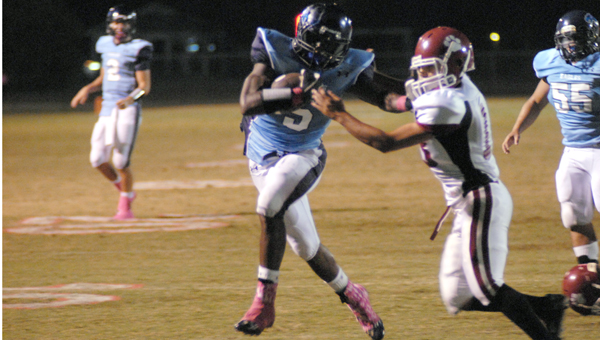 CALERA – The Calera Eagles’ defense picked up their second shutout of the season while holding the Shelby County Wildcats to just 212 yards to cruise to a 49-0 victory in a painted pink Ricky M. Cairns Memorial Stadium on Sept. 27.

“Shutouts have been hard to come by here,” said Calera head coach Wiley McKeller. “It’s something that we have put a lot of emphasis on – running the football and playing great defense. We are very proud about how our defense has come, but it’s not where it needs to be.”

The Eagles’ defense led by Sam Adams put Calera on the board to start the game. Shelby County mounted an impressive drive after receiving the opening kickoff working their way down to the Calera 7-yard line. Adams made a play for his defense when he recovered a Wildcat fumble at the 4-yard line and took it the other way for a 96-yard touchdown for a 7-0 score just four minutes into the game.

“Anytime you get a defensive touchdown it’s a big momentum swing,” McKeller said on the Adams’ return.

The Calera offense scored its first touchdown of the game on its first possession of the game, driving 94 yards capped by a 17-yard touchdown run by quarterback Zack Reneau.

Adams scored his second touchdown of the game on the Eagles’ third possession running the ball into the end zone from 16 yards out for a 21-0 Calera advantage at the end of the first quarter.

Turnovers plagued Shelby County and the Eagles made the most of the opportunities. The Wildcats lost three fumbles in the first half, and had two interceptions in the second half. Four of the five Wildcat turnovers led to Calera scores.

The Eagles added two touchdowns in the second quarter, both of which came from Shelby County turnovers. After a Wildcat fumble, the Eagles took advantage of the short field when Reneau connected with Jordan Bishop on a 17-yard touchdown pass for a 28-0 lead.

Reneau found Ronnie Clark for a 74-yard touchdown pass following a Calera fumble recovery to extend the lead to 35-0 at the half.

The Eagles took no time getting back in the end zone in the second half when Reneau broke free for a 53-yard touchdown run to make the score 42-0 just 52 seconds into the third quarter.

Adams scored his second defensive touchdown of the game on the Wildcats’ first play from scrimmage in the third. Shelby County quarterback Ty Proctor had a pass tipped at the line of scrimmage and Adams came up with the interception and returned the ball 40 yards to extend the lead to 49-0.

The Calera senior picked up his second interception of the game on the next Shelby County possession to halt a Wildcat drive on the doorstep of the red zone.

The Wildcats drove inside the Calera 30-yard line four times in the game but the Eagles stood tall to preserve the shutout.

Reneau threw for 122 yards in the first half on 4-of-7 passing with two touchdowns.

Calera kicker Stephen Ellison was a perfect 7-of-7 on extra point attempts.

Proctor led the Shelby County offense throwing for 81 yards and running for 49 yards on 11 rushes. Brandon Shields finished the game with 18 rushes for 44 yards with Martarius McGregor adding 30 yards on 14 carries.

Calera will return to action Oct. 5 when they travel to Carbon Hill in Class 4A, Region 4 action. Shelby County will face Ramsay on the road in a Class 5A, Region 4 game.

NOTE: Calera’s win over Shelby County is the first against the Wildcats since 2006 for the Eagles’ second win in five meetings.