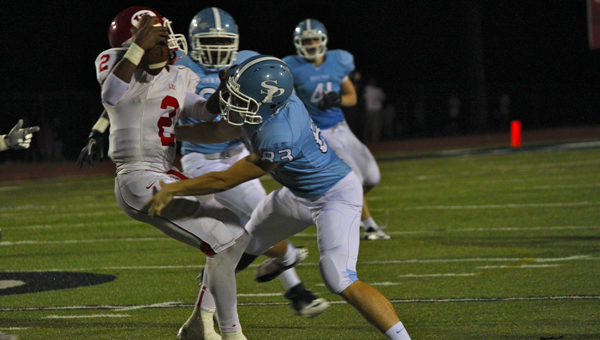 By KALA BOLTON/ For the Reporter

HOOVER – A prolific first half gave Spain Park all the steam it needed to round up homecoming week with a 42-16 victory over Robert E. Lee High School Sept. 28. Senior quarterback Nick Mullens led the Jaguars (4-1) to victory with five first-quarter touchdowns, adding a fourth-straight victory to Spain Park’s record.

“It’s awesome,” Mullens said of bringing in a homecoming victory for his school. “Our principal is doing a lot to give us support and we’re trying to feed that by winning some football games. That’s what we’re doing, and it’s really working out for us. “

The Jaguars came out firing, scoring all 42 points in the first half. On Spain Park’s second offensive drive of the game, junior running back Jontez Turner scored on a 5-yard run, capping an 83-yard scoring drive. That drive was complimented by an interception by senior defensive back Zach Newton, setting up a 5-yard touchdown pass from Mullens to senior Ben Olinger.

The Jaguars’ defense held the Generals to another three-and-out series, setting up a 37-yard scoring drive that culminated with a 6-yard Mullens pass hauled in by senior M.J. Brown. Junior Thomas Taylor’s extra point gave the Jaguars a 21-0 lead to close out the first quarter.

“We started off slow, but we just had to clear things up and focus on our assignments,” Mullens said. “Every player did their job and ultimately led to success. The offensive line did a great job for me, and I had plenty of time to throw [the ball].”

Mullens started what proved to be an impressive second quarter with a 66-yard touchdown pass to Olinger followed by a 78-yarder to Brown on the Jaguars’ ensuing offensive drive, overshadowing an 80-yard touchdown run by the Generals to put them on the board. An interception by junior Austin Haight set up Mullens’ fifth touchdown pass of the half as he floated a 31-yard pass to senior Jake Grisham to give Spain Park a 42-6 lead. The Jaguars’ lone punt of the first half came with just 2:50 remaining, setting up a 28-yard field goal by the Generals and sending Spain Park into the locker room with a comfortable 42-9 lead.

The Generals’ offense saw more action in the second half, but were widely outmatched by a stingy Spain Park defense. Junior Mickey Forrest and sophomore Mason Duke took the reigns at quarterback for the Jaguars in the second half, but were unable to find a way into the endzone. Fighting till the last seconds, the Generals scored on a 24-yard sling pass with 1:06 remaining to close out the game.

“I was proud of our effort,” said Jaguars head coach Chip Lindsey. “We had a great week of practice, and I think that helped us play well tonight. We came out and played well early and really took care of business and tried to play at the level we want to play at, no matter who we are playing. Lee of Montgomery has a very young team, and we knew that going in, but they played extremely hard and they’re well coached.”

With homecoming behind them, the Jaguars will travel to regional opponent Thompson next week, and Lindsey said a big win like this is just what the team needs to keep up the energy.

“We’ve won four games in a row now, and that help give us some momentum,” Lindsey said. “Now we’re getting back into region play, and that’s important. We want to continue to improve each week and play well. I think we’ve made strides.”