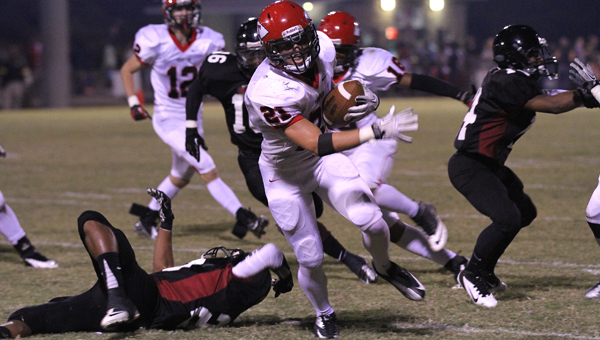 By ERIC STARLING/For the Reporter

Using a big dose of D and Dee, the Thompson Warriors went on the road and secured their second Class 6A, Region 4 win of the season with a 28-17 victory against the Mounties of Shades Valley.

The Mounties were moving the ball on the ground early, when a big defensive hit was placed on the running back and Senior Austin Bates was in the perfect place. The ball shot straight into his hands and he vaulted over the back and ran 32 yards for the first score of the game. A David Buckelew point after attempt made it 7-0 Warriors.

Thompson took over late in the first quarter at their own 10 yard line and gained a first down to the 38. Quarterback Trey Matherson called his own number and scrambled 18 yards to move the ball into Mountie territory. At that point, the play was simple. Give it to Dee Tolbert and watch him run. Four straight runs by Tolbert and the Warriors added seven more to make it 14-0 after the Buckelew kick.

Pumped up by a 40-yard kickoff return, Shades Valley drove deep into Thompson’s end of the field, but missed their field goal attempt.

Tolbert was at it again on special teams as he returned a Shades Valley punt 44 yards to the Mountie 6-yard line. On the very first play from scrimmage, Tolbert took the ball and rumbled in for the Warriors. The extra point was blocked and the Warriors held a 20-0 lead with 4:42 left in the first half.

After the Mounties scored a field goal, they got the only turnover from the Warriors on the evening when Matherson’s pass was intercepted with 27 seconds left in the half. As time expired, the Mounties scored on a 35-yard pass play after a critical fourth down penalty by Thompson gave them a first down.

“We are happy to get a win any way we can. Our players know that on every play they have another opportunity to make a play,” stated coach Michael Montgomery.

The defense did just that when they returned from the halftime break. The Warriors forced a fumble on the first play and recovered to give the offense the ball. The drive ended with an unsuccessful fake field goal.

Tolbert added to his numbers later in the quarter when he scored from 4 yards out. After a penalty on the point after attempt, Tolbert lined up in the Wildcat and took it in for the two point conversion. He finished the night with 114 yards on 19 rushes.

The Mounties would add a touchdown late to make the final 28-17.

Matherson finished 11-for-26 for 176 yards. The Warriors leading receiver was Eric Reeves with 5 catches for 108 yards.