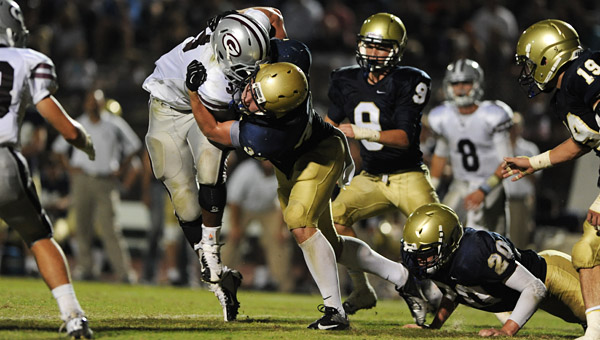 Despite being outscored 20-7 in the second half, the Rockets held on to win a game that featured big plays in all three phases.

Leading 7-3 early in the second quarter, it was Howard who sparked the Rockets’ offense. He nearly scored on a 70-yard scamper, taking the ball into the end zone from a yard out on the very next play.

The Lions answered with a four-play scoring drive, capped by a 54-yard touchdown pass from Wilkins to senior receiver Daniel Robert.

Blackburn recorded his second interception of the night on Briarwood’s next possession. The pick ended a long drive that went deep into the Gardendale side.

The key play in Gardendale’s ensuing drive was a 38-yard pass from Hunter Cronk to Blackburn, who plays tight end on offense for the Rockets. The pass set up a 29-yard Sam Peacock field goal to put the Rockets up by seven.

The first play of Briarwood’s next drive was the game’s third interception. Juan Jackson came up with a Wilkins pass at the Briarwood 21-yard-line.

A five-yard halfback pass from Jackson to Blackburn capped a four-play drive with a touchdown to capitalize on the turnover. At halftime, the Rockets led 24-10.

The Lions scored on the opening drive of the second half, closing the score to 24-17 with a 12-yard touchdown dash by Wilkins with 9:20 to play in the third quarter.

After the Rockets turned the ball over on downs, Jackson intercepted his second ball of the night off of a halfback pass thrown by Victor Jerald. The Briarwood defense held strong, not letting the Gardendale offense score despite starting the ensuing drive at the Briarwood 39.

Gardendale scored next in the fourth quarter with a nine-play, 56-yard drive that ended with a one-yard Cronk sneak for a touchdown.

The Lions offense answered with a 74-yard drive of its own. The scoring play was another long connection between Wilkins and Robert, this one a 37-yard pass.

Gardendale, working from its own 20, started a 10-play clock-killing drive on offense. Its abrupt end came with a miscommunication between quarterback and tailback which resulted in a Briarwood-recovered fumble.

“They just got confused, and I take complete blame for it,” Fancher said.

Three different receivers caught first-down passes on three consecutive plays for the Briarwood offense. The Lions’ last offensive play of the night was a 38-yard touchdown catch with 1:28 to play by junior Brayden Housel which gave Briarwood the chance to either win the game or send it into overtime.

“It was obviously the wrong decision [to go for the extra point instead of a two point conversion],” Briarwood head coach Fred Yancey said. “I thought at the time they were more tired than we were and I felt like we would have a chance to win it in overtime.”

Burdette got the penetration he needed in order to be in the position he needed to block the Lions’ extra point attempt, keeping the Rockets a point ahead.

“I needed to give it my all for the team,” Burdette said. “It wasn’t my effort, it was the team’s effort and I just did what I had to do.”

Gardendale recovered the ensuing onside kick and ran the clock out until they were victorious.

The win puts the Rockets at 2-3 for the season, and Briarwood falls to a 1-4 mark.

“I was proud of both teams for fighting real hard,” Yancey said. “In a tight game like that it’s going to be a disappointment for whoever loses and a great win for whoever wins.”

Howard led all rushers with 113 yards. Despite throwing three interceptions, Wilkins led the passing attack for Briarwood, going 21-34 for 341 yards and three touchdowns. Robert was the overall receiving leader, catching four passes for 142 yards and two scores for Briarwood. Gardendale’s leading receiver was Blackburn, who added 91 yards on six catches to his pair of interceptions.