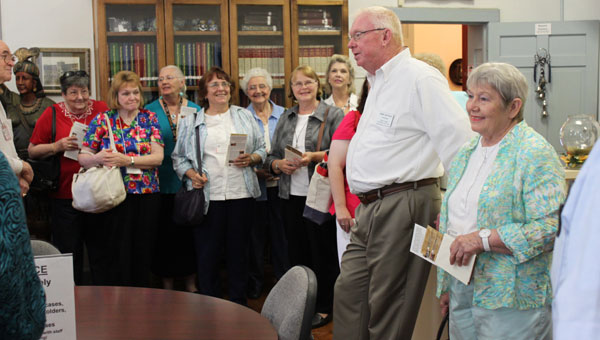 Bobby Joe Seales, executive director of the Shelby County Museum and Archives, shares with the women from the National Society of the Dames of the Court of Honor Sept. 28. (Reporter photo/Christine Boatwright)

The National Society of the Dames of the Court of Honor visits a different state each year for its national conference. This year, the ladies of the society attended the 85th conference in Birmingham, but they spent their “fun day” touring Shelby County’s best Sept. 28.

To be a part of the society, women must be of good moral character and descended from a commissioned officer of one or more of the American wars between 1607 and 1865, which includes the American Revolution, the War of 1812 and the Civil War, according to Birmingham resident Anne Gibbons.

The Shelby County day began with a tour of the American Village and lunch at Bernie’s on Main in Columbiana. The group then divided to visit the Shelby County Museum and Archives at the Old Shelby County Courthouse and the Smith-Harrison Museum of George Washington.

According to Annette Smith, a society member from Ranburne, members prove their lineage through a number of sources, including birth, marriage and death certificates, gravestones and cemetery records, wills and notarized first-person accounts.

Shelby Ward, Alabama state president, called the Dames of the Court of Honor, which has about 1,200 members nationwide, a “patriotic genealogy society.”

“We believe in honor,” Ward said, “and officers were men of honor.”

Cynthia Rhoades, a member from Indiana, said one of the fun parts of the society is traveling to a new location each year.

“You kind of get hooked,” Rhoades said. “Some people like the research part and tracing your ancestors.”

Kathy Ward of Memphis, Tenn., said learning about her heritage is like “doing a never-ending puzzle.”

“Learning about history is a lot more exciting when you have a personal interest,” Ward said. “You have a better sense of who you are, where you came from and about your cultural background.”