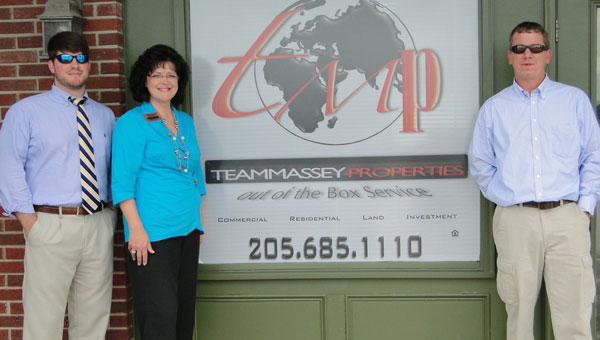 Nathan Stamps has done a little bit of everything.

He’s run a game room, pumped gas, cut grass and sold cars. He began a career in real estate in 1992.

“A real estate broker called and offered to pay for my real estate license,” Stamps said. “My dad, Sherwood Stamps, was a real estate developer, so I’d been around it growing up. I got my license and went to work for Century 21 in Montevallo.”

In 1997, he opened Stamps Realty in Montevallo.

Stamps kept things simple until December 2010 when the failing market forced him to close.

Stamps wasn’t sure what he would do until he received a call from Team Massey Properties owner Fran Massey.

“Fran and I worked together at Century 21, and she’s kin to my wife,” Stamps said. “Fran was opening a new company in Pelham. I saw it as an opportunity to learn some different things, so I said I’m in.”

Stamps started selling cars about the same time, but gave that up a year later to pursue increased real estate activity. “I was going to sink or swim in real estate, it’s what I know and love and I believe in,” he said. “If the real estate market doesn’t make it, the rest of the country’s not going to make it. Without it there’s nothing.”

Following in his dad’s footsteps, Stamps buys “pieces of the United States of America.” He sees investment potential in Montevallo.

“With all the things the college and county are doing in town, I believe some folks will look at Montevallo who haven’t looked before,” he said. “I have property on 119 for hotel and restaurant sites close to American Village. The village, the veteran’s cemetery and the University of Montevallo are tax funded and they’re not going anywhere. The private investment is coming.”

Fran Massey and her team of five agents have a combined experience of 40-plus years. “We think of ourselves as a boutique shop, we know we’re small, but we get big, big results,” she said.