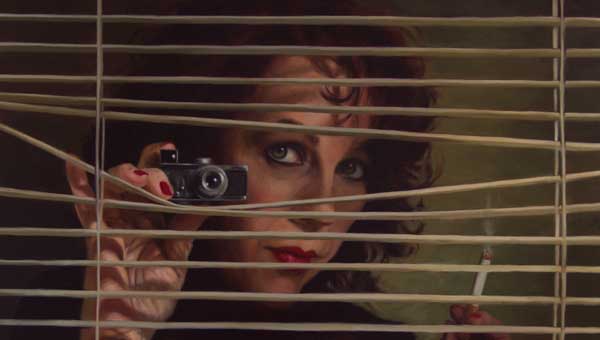 The cover image from Terry Strickland's "The Incognito Project." (Contributed.)

PELHAM – On a July day in 2010, Terry Strickland’s home was overrun with characters.

Knights, detectives, Greek goddesses and detectives visited her Pelham home for a party that marked the beginning of a two and a half year journey. The characters, all 25 of them, were Strickland’s friends and family, who were participating in her newest project – a series of paintings that examined people’s alter egos.

“The idea is that we all have some kind of secret self,” she said. “If you weren’t living this life, what kind of life would you be living?”

What was originally planned as an art project evolved into a book – “The Incognito Project.” The book features the 25 paintings, but it also includes behind-the-scenes photos, famous quotations about myths and alter egos and commentary from Strickland.

The book will be released this fall, and Strickland will celebrate its release with a one-day exhibit of the 25 paintings at the Art Folk Gallery in Birmingham on Nov. 3.

The exhibit is the culmination of several years of work.

Strickland, a former graphic illustrator who became a full-time artist in 2005, first came up with the idea in 2008. One of the attractions of the project was that it allowed the models to contribute to the process.

“What I’m noticed over the years is my models really enjoy the photo shoots,” she said. “I guess I wanted to have that in a planned way. That is why I invited people to be collaborators in the photos and the costumes in the very beginning.”

She worked with the models, including her husband, their two grown children and their daughter-in-law, to develop their alter ego. While some had an idea immediately, others needed some direction.

She borrowed many of the costumes from Samford University’s theater department. Her favorites included a knight’s costume – dented and rusted as if it had actually been through battle – and a lion tamer’s outfit that was adapted from a “Beauty and the Beast” production.

Although she liked the spontaneity that the models brought to the project, Strickland planned the photo shoot to the last detail.

“I designed little thumbnails of how I wanted the models posed and the light for each one,” she said.

The models were invited to a party at Strickland’s studio in her Pelham home.

“I thought it would be fun for everybody to see each other’s egos,” she said.

From noon to 7:30 p.m., Strickland photographed the models. The party was only the beginning of her work. Since that time, she has steadily painted the photographs, juggling other projects and finishing the final painting of “The Incognito Project” in mid-September.

The idea for the book came soon after the photo shoot. The Stricklands, who combined have experience in writing, illustrating and art, decided to form a publishing company – Matter Deep Publishing. The company was incorporated in July 2011.

The company used Kickstarter – a website that raises funds for creative projects – to raise the money to publish the book. The final product is a 128-page, hardcover book with an introduction by Graham C. Beottcher, the American art curator at the Birmingham Museum of Art.

“The (cover of) the book is like a detective file,” Strickland said.

The paintings from “The Incognito Project” fit into Strickland’s style. She puts equal emphasis on concept and technique and prefers trompe l’oeil style, which makes objects appear to be three-dimensional.

“I consider myself a contemporary realist,” she said. “I like my work to look like an old master painting, but I like for it to have a contemporary (feel).”

“The Incognito Project” costs $60 and can be ordered by emailing Strickland at terrystr@terrystricklandart.com. For more information, visit TerryStricklandArt.Blogspot.com.