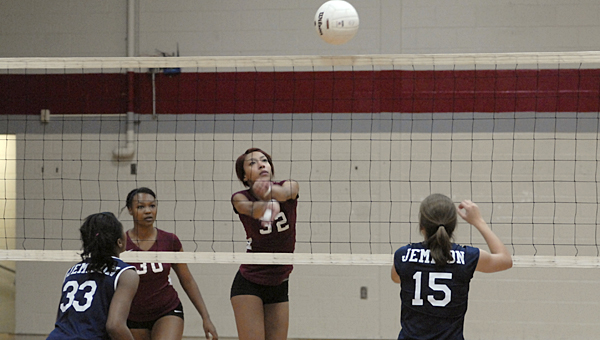 Shelby County's Alisha White spikes the ball against Jemison in the Wildcats 3-1 win over the Panthers on Oct. 2. (Reporter photo/Graham Carr)

Shelby County coach Jamie Creekmore said he was pleased with his team’s effort all night.

“We had good energy the whole night and we were able to hold on at the end,” Creekmore said.

In the first set, Shelby County led 4-3 in the early going, but Jemison used a 4-0 run to claim a lead that the Panthers did not relinquish. Shelby County got as close as 17-15, but Jemison put the game away by finishing on an 8-3 run.

Shelby County took control of the third set with a good start.  The Wildcats led comfortably 12-5 at the midway point and led 20-13 later in the set, but had to hold off a late Jemison rally to 25-22.

FROM STAFF REPORTS MONTEVALLO – The University of Montevallo men’s and women’s basketball teams will kick off the 2012-2013 season... read more