Hibbett facility set to open in 2014 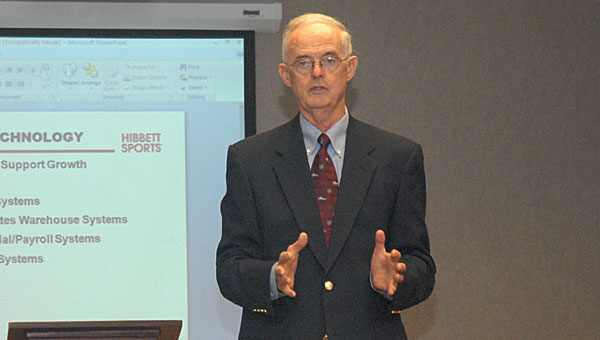 During an Oct. 4 Alabaster-Pelham Rotary Club meeting, Hibbett Sports Executive Chairman Mickey Newsome told the group the company is preparing to bid out the project on Dec. 1, and is looking to begin operations there in April or May 2014.

“We will be doing a lot of hiring down here, we’ve got to,” Newsome said.

Alabaster Mayor David Frings previously said the company will bring about 150 jobs to the city when Hibbett moves the distribution center from its current location in Birmingham to Alabaster.

When the new distribution center opens, the company will only use about 300,000 square feet of the facility initially, Newsome said.

“That will give us some room to expand,” Newsome said.

Alabaster officials previously said Hibbett was looking at several possible sites for the new distribution center, and chose the Alabaster site over another finalist site in Tupelo, Miss.

The new Alabaster distribution plant will help the company keep its stores stocked as Hibbett looks to open hundreds of new locations across the country in the near future.

Hibbett currently operates about 850 stores, and is looking to expand the number to 1,500 over the next few years, Newsome said. Most of the stores, which offer name-brand merchandise with a focus on team sports, are located in small markets, Newsome said.

“We are small-market operators. We don’t go to Birmingham-size markets. We will go around the major markets,” Newsome said. “We like to be in pockets of convenience. Alabaster is a pocket of convenience.”

“We follow Walmart around,” Newsome said. “They don’t have any of our brands, so they are not our competitors. We want to be as close as possible.”