Chelsea comes up short at OMHS 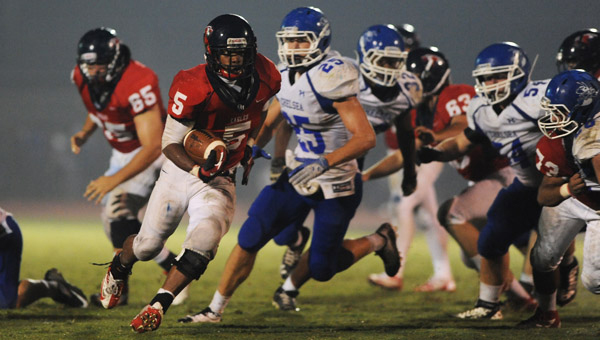 “We knew it was our game to lose, so we went out and took it from them,” Kelley said.

Kelley broke up a fourth-down pass into the end zone on Chelsea’s first drive of the game, holding the Hornets scoreless after a 61-yard opening kickoff return.

Scott Hester broke open for a 41-yard gain on Oak Mountain’s opening offensive drive.  The long dash set up a six-yard Hester scoring run to put the Eagles up 7-0 at the 7:28 mark of the first quarter.

Chelsea fought to keep the scoring difference as small as possible.  The Hornets dominated the battle of possession for most of the second quarter, but missed their only scoring opportunity with a missed Taylor Martindale 30-yard field goal.

With a minute and 11 seconds until halftime, the Eagles launched a seven play, 80-yard drive to make the halftime score 14-0.

The scoring play was a 23-yard strike from Jake Adams to Xavier Cochrane with seven seconds remaining in the half.

He scored his only touchdown of the night from 14 yards out five minutes into the quarter to make the score 21-0.

The other score of the third quarter was a three-yard Adams sneak after a failed Chelsea fake punt gave the Eagles only 24 yards to score.

Down 28-0, Chelsea began a fierce comeback, scoring three touchdowns of 35-plus yards in the first six minutes of the fourth quarter.

“We played really hard and made some plays in the passing game,” Chelsea head coach Wade Waldrop said. “We were able to get back in the game, but not to get the win.”

A 54-yard Austin Washington reception from Trent Hagin opened up the Hornets’ run just 11 seconds into the quarter.

Julius McCall, the workhorse of the night for Chelsea, scored the next two touchdowns for the Hornets.  His first, a 38-yard run, came a minute and a half after the Washington touchdown.

“[McCall] played hard like he always does,” Waldrop said. “I wish he’d gotten a few more yards, but we just need to get back and get better.”

McCall finished with 142 yards on 27 carries and four catches for 64 yards, accounting for 206 yards of total offense for Chelsea.

For the Eagles’ offense, Gaines contributed another 58 yards in the fourth quarter despite playing with a possible MCL strain.

Gaines, who twice spent an extended time down on the field, got back in to help run the clock down before John Michael Miller’s game-winning field goal with 34 seconds remaining.

Miller’s game-clinching kick would not have happened had Antwon Williams not come up with a fumbled hook-and-lateral by Chelsea with two minutes remaining.

“That was a turning point in the game,” Williams said. “If I didn’t get that, no telling what would’ve happened.  It was big.”

Oak Mountain moves on to an Area 4 showdown at Spain Park next week, as the Hornets look to stop their three-game Division 6A losing streak against Wetumpka.

Shelby County quarterback Ty Proctor threw for 134 yards and a touchdown in the Wildcats' 36-29 victory over Ramsay on... read more